Having grown up with her mother as a music therapist and watching her brothers toy around with various musical projects, it comes as no surprise that Kate Bollinger’s first release of 2020 sees her using her music to reflect upon her inner turmoil.

“A Couple Things” was penned at a time when Bollinger “was uncertain about a lot of things in her life. “I was stepping into a newfound independence, unsure of my footing, but the song was partially written as a means of clearing the uncomfortable feelings I had out of my head,” she explained.

Despite the torment described in the track, musically it’s a blissfully serene journey. “A Couple Things” has the relaxed sensibilities that are innate to Bollinger’s music. There’s the presence of intricate bass work that gives the track a heft to it despite the featherlight guitars. The ringing cymbals lend “A Couple Things” a near swinging sound and, in many ways, it is reminiscent of a smooth jazz track. It wouldn’t feel amiss in a cocktail lounge or poolside on a sun-soaked day.

As ever, Kate Bollinger has a specifically pleasant cadence and tone to her voice, one that gives itself perfectly to the bedroom pop genre in which she resides. It’s leisurely in sound but possesses a lovely flow that gives “A Couple Things” a delightful buoyancy and levity.

For a track that sits under three minutes long, “A Couple Things” is stuffed full of clever and playful nuances. With each listen, more is revealed: the careful way in which Kate’s vocals are layered creates a texture to the still surface of the track. 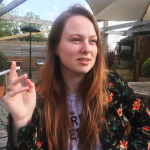