Well, it’s been a rough week, friends, with widespread anxieties running rampant concerning the coronavirus, politics, and wherever it is we all work (yep, it was a rough week there, too). Which is why the superb, dance-cry synth-pop of Sulene‘s “Kiss Harder” couldn’t have arrived a moment too soon — it is exactly the song we could all use today.

You’ve definitely heard Sulene van der Walt before — she has composed music for drama series, films, and major-brand commercials — but most likely didn’t know it was her. Here, however, we get the latest taste of her pop-artist persona, and it’s a delectable confection that deserves to be celebrated.

“Kiss Harder” is a deceptively sad song, though you’d never know it by the blissful rush of the arrangement, vocal melodies, and many of the lyrics. But pay closer attention to the situation she’s describing and it’s just devastating. Everything kicks off with an uptempo ’80s drum beat as Sulene sings about/to the object of her affection over a simple synth pad. Wasting no time at all getting to the hooks, by just over twenty seconds in we’re already at the pre-chorus, which is so deliriously catchy it might as well be the chorus itself. It’s a euphoric moment, strategically placed early in the track to give the impression of rapture — the syncopated, giddy high of “Everything about you gives me that feeling!” immediately followed by the coy daydream of “This could be something.” This sentiment — matched by the crescendoing pads, sparkling synths, and riffy guitars in the musical arrangement — holds true through the chorus: “We touch like we’re in love / We talk like it’s sent from above.”

It’s pretty much the ultimate crush song… until the next two lines of the chorus: “If we kiss harder could it be enough? Cause something isn’t fitting and I just can’t figure it out.”

In other words, it’s that common conundrum that plagues most relationships at some point or another: if we’re just more passionate, will that fix the problem? But rarely is this idea treated as directly and honestly as it is here. Sulene knows the answer to that question is “no” — there are always other underlying issues at play — but it’s not human nature to think that way, and by the end of the track she is repeatedly pleading for her partner to “kiss her harder harder harder harder.” She doesn’t want this relationship to end, even though she knows it will, and is grasping at straws to make it work.

At first blush, this is early Madonna territory (we actually already wrote that about her banger “Diamond“) . But a more apt comparison is a more bedroom-produced version of Carly Rae Jepsen‘s output from the past several years. There’s even a direct CRJ reference in the form of a reverby “Hey!” emoted in the background at 1:09, as well as other pop tropes like the unexpected key change at about 2:30, and the one-off harmonized background vocal a few seconds later, “I think it could be enough!”

“Kiss Harder” is an absolute jam, and one that continues to reveal its candy-coated layers upon repeat plays. Check it out, along with the full “Fire Escaping” EP below — it’ll win you over, and help you get through the next week. 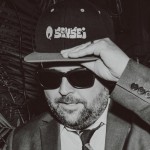