Wy‘s new song “Pavements” is out via Hybris.

A year on from their excellent debut LP “Okay”, Wy continue as a force of bold self-expression with new single “Pavements”, a sonic upchuck of the chaotic thoughts that surround sadness and self-doubt. Swerving out from the confines of the sound they built their growing fanbase through, “Pavements” has touches of Muna-esque indie power-pop driven by melancholy; intent on pouring this into something we, and Wy themselves, will find release in. Speaking on the new single, Michel cites the intentionality behind this change in energy:

With Pavements I wanted to break off the slow pace of our debut record. It quickly grew to be a discharge of the emotions we’d been carrying around with us.

Wy are Ebba and Michel, a couple who began making music together under this moniker in 2015 after having performed together previously in other bands. The feeling of intimacy that underpins their relationship pervades every aspect of what they do, and is opened up to us through their honest lyricism, delivered with distinctive, and in some places, unrelentingly guttural vocals which imbue the track with the duo’s characteristically jarring emotional edge.

This emotional openness carries with it a refreshingly uplifting approach toward pain or confusion: to address and move through it. Without shame or restraint, Wy show a no-holds-barred take on expressing and living through even the most terrible feelings. On this track, they own turmoil triumphantly with lyrics like “But I don’t need to see clear… / My depression is a weapon / It’s the only thing that makes me feel here.” Hard-hitting and emotionally in-tune, Wy’s message is one worth paying attention to. 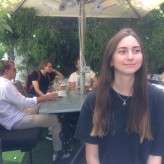 Partial to a sad indie song. Head of Music at Queen's Radio. Raised in Spain, she is currently based in Belfast studying literature and philosophy.