Meeting with the psychedelic and dreamy Nick Hakim

Prior to meeting Nick Hakim before his live at the Point Ephémère in Paris, I was told that he wasn’t much of a chatterbox. In a way it turned out to be true, for he did punctuate lots of his sentences by a concise “it just made sense”.

But like his album “Green Twins”, out now on ATO Records, he’s an artist that needs a fair amount of time and energy to work out. That said, considering the dedication and meticulousness he shows in his music, it is definitely worth your while.

Highclouds: You spent 3 years working on an album that ended up to be very diverse. Why did you choose to call it “Green Twins”, like the title song?

It’s one of the first song that I wrote. It just made sense conceptually, because it represents a feeling common to all the other songs. Once I had wrote that song, everything else kind of fell into place alongside.

You said before that this song was about a dream. Do you have the slightest idea of what is this dream about?

There was a couple of songs on the album where I went through a phase in which I would write down my dreams when I woke up. There’s pretty great ideas for writing in these weird things that happen in your dreams. It just made sense to me.

What are the Green Twins?

It was a dream that I had about these two green babies. My partner and I were walking down the street and they would run past us. They were like little, jello babies that would run past us and go into the street, and then they would get run over by a car. And it happened three times. And it was really weird that it happened so many times, so I just wrote about it and that’s what it is. 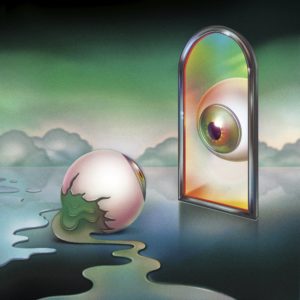 “I think there’s a lot of ways to interpret it. It’s kind of dream-like, and beautiful…Yeah it just made sense.” – Nick Hakim

Since we’re evoking symbolism, can you tell me about the mirror on the cover of the album? You also put one on your facebook profile pic, so I guess this is strong imagery for you?

I collaborated with this artist, Keith Rankin, I love his work, and I asked him if he’d be willing to collaborate with me. We had a bunch of conversations about what the albums is about and there was this moodboard that I made, like a tumblr, with just visual references. So he drew that and send it to me. I think there’s a lot of ways to interpret it. It’s kind of dream-like, and beautiful…Yeah it just made sense.

So you seek inspiration in you dreams, but also in things that you like and that you can gather around, as you did with your moodboard. There’s also a Spotify playlist that you made, “Pootie Tang“. Do you feel like digging for music is important for an artist?

It’s fun man. There’s so much history, and so much music that is happening…I do listen to a lot of things over and over, things that I have been listening to for a long time, but I also like looking for new things, especially physically digging for music.

Do you get enough time to do that on the road?

Not as much as I’d like. A little bit. We leave Paris tomorrow, but I’d like to visit new shops, cause I have been to Paris a few times to visit and there are great stores here. I like French music too, like Jacques Brel, with his crooner kind of voice, and Françoise Hardy, she’s gorgeous, and her music is so quiet and gentle…I found some of her records inspiring.

You named you playlist “Pootie Tang”, it’s from the movie, right?

In the movie, the main character talks some kind of gibberish that only the other characters seem to understand – but not the audience. Do you find it hard to connect with people who don’t speak your language, as an experimental musician?

Well, I can’t control who likes my music, or how they react, so I just accept it when people like the songs I wrote. Well, that’s an interesting question!

Have you ever wanted to try to write a pop song?

Hum, I don’t know. I feel like pop music changes so much…the definition of what popular music is is pretty vague ! Well there’s like the top forty, charts, and I think some of it kinda cool, like in the South, Trap music, which appeared very early in the 2000s, and now everybody is doing it. But I don’t know, I’m definitely about doing good-sounding music. It turns out my album sounds pretty experimental, but for me I just work with the tools I learn to use, like drum machines, how to make the beats better, using synths… 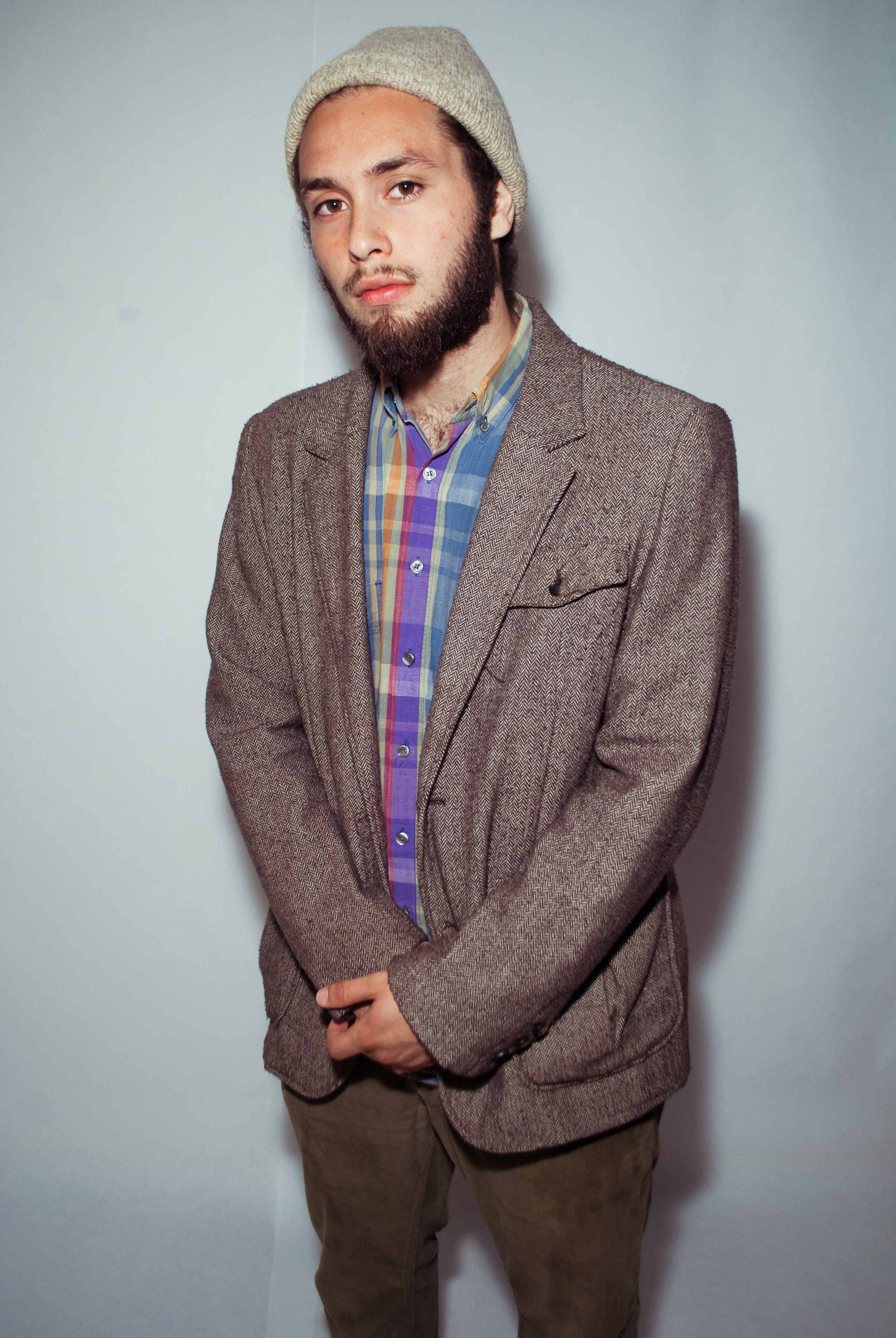 “You have to write even if you feel lazy or shitty, even if you don’t make something good, you got to get something out.” – Nick Hakim

So it’s more about letting go than aiming for something specific?

Yeah, I learned more how to do music from a formal point of view, like theory, but now it’s more about experimenting with tools. But I really like learning theory, the different chords that you can use, tensions… And I’m still learning a lot, and I got a lot to learn.

And you’re a multi-instrumentist, you play guitar, keys, you do lots of harmonies with your voice…Which one feels more natural?

The voice. And keys. Guitar I started learning in my early twenties. So I taught myself.

Your songs happen to be pretty airie, do you aim for a specific state of mind to write or perform?

That’s hard cause I think I’m still learning how to be consistent. One thing that I do is…each show is very different. I don’t know with me it’s pretty up and down, when I perform. I’m trying to find my routine, to find how I collect myself…But I think recording is different cause there’s endless time that you could spend doing stuff so you kind of have to be in a certain headspace, a kind of mood. But also it’s about working on that, it’s like a muscle. You have to write even if you feel lazy or shitty, even if you don’t make something good, you got get something out.

Like what you were saying about writing down your dreams? Where did you get this idea?

My friend Terrence told me to do it. Cause I was telling him about these weird dreams I was having. So he was like “write that shit down, and read over it. Think about what it might mean”. Terrence [Nance], I consider him like a mentor of mine. He directed two of my music videos.

Back to the music. Although you songs are pretty chill and laid-back, you sometimes scream and shout, while there’s a heavy use of electric guitar. Do you try to express some kind of hidden anger or angst?

Yeah, it’s something that we all feel right? But also, I’d say that on some songs I record I try to experiment with my voice, like kind of to develop a character. On the Green Twins album, I experimented a lot of personalities on how I sing, in comparison to the Where We Go EPs…And it expresses a pretty real feeling about frustration. But there’s also a lot of the exact opposite. Yeah, I’d say it’s not even angry, it’s more about what I can do with my voice, I’m just doing things, and it feels like bliss. It sounds the way it sounds, people can think it’s angry, or weird, but it’s definitely how I feel. It’s also about seeking something. I’m really inspired by a lot of singers, like Bilal, who’s one of my favourite singers of all time. He’s the reason I started to develop personalities with my voice, cause he does that. In one song, he’ll have this very sentimental, beautiful tone, but then he’ll start this – it’s not even angry – yelling, like lots of singers that grew up in church, there’s this natural kind of thing about it : it’s just about expressing yourself.

My final question’s a little bit off-topic, but the way you dress, with the cap, kind of like Fidel Castro, the fact that you’re from Brooklyn, a very cosmopolitan neighborhood, and that your name doesn’t sound quite “American”, made me wonder how you feel about America today?

Well, I think it’s almost embarrassing in a way…But I think a lot of people have come together, in the creative world and see how the system affects us living in the states, and a lot of people are making music around this political climate. Even in the last couple of years, like Kendrick‘s “To Pimp A Butterfly”, or Solange’s album that just came out. These are politically charged records reflecting lots of different variables of society…There’s this guy from Baltimore, Abdul Ali, he’s incredible. Fucking phenomenon. He has this energy, like punk rock, it’s energetic, like in you fucking face! There’s a lot of bands like that in New-York right now, like Princess Nokia, Show Me The Body…There’s a lot of bands coming up in New-York that catch this energy, that reflects how they feel about shit. But it’s all communal, it’s all about bringing people together, about sharing emotions, and make this frustration positive.

You can follow Nick Hakim over Facebook, Twitter and Soundcloud. His album “Green Twins” is out now via Ato Records and you can order it here.