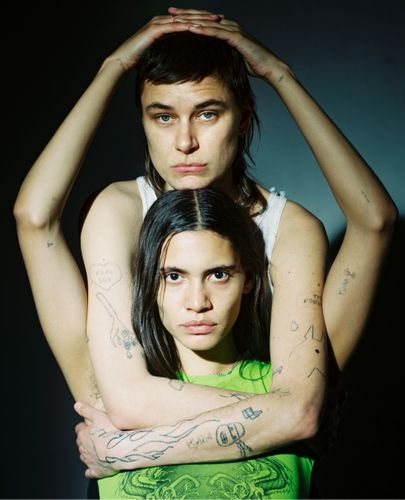 Amongst a rocky crag, Kaya Wilkins and Stine Omar are seen interchangeably singing straight down the camera lens. This is the video accompaniment and first visual introduction to the debut single from RØR, an experimental electronic pop and bedroom pop on steroids duo formed of Kaya Wilkins of Okay Kaya and Stine Omar of the Berlin-based duo EASTER.

“Buff Sensual” is two minutes of a pulsing beat, fusing elements of euro disco and more lo-fi, experimental dance music. Yet rather than be delivered with the usual frantic energy of the genre, “Buff Sensual” leans heavily into the more relaxed approach that permeates the music of both Okay Kaya and EASTER, giving the song a true sensuality as the title suggests.

Sandwiched between two melodic near spoken verses, is a harmonic chorus consisting of Omar and Wilkins describing their nights” trying something different”, complete with implied hedonism and references to exercises that can also be interpreted as experimental dance moves.

“Buff Sensual” reeks of sultry and sleazy nights dancing in clubs until the early hours. There’s a seductive power to Kaya Wilkins‘ airy pitch and Stine Omar’s deep and resonating tone that lends itself perfectly to a dance bop. With their debut track, RØR have created a low-key dance anthem that will assuredly keep everyone dancing at the “techno gym”. Watch below.

Thanks TURTLENEK for the discovery. If you dig this track, check our Spotify playlist Edgy Poppers.