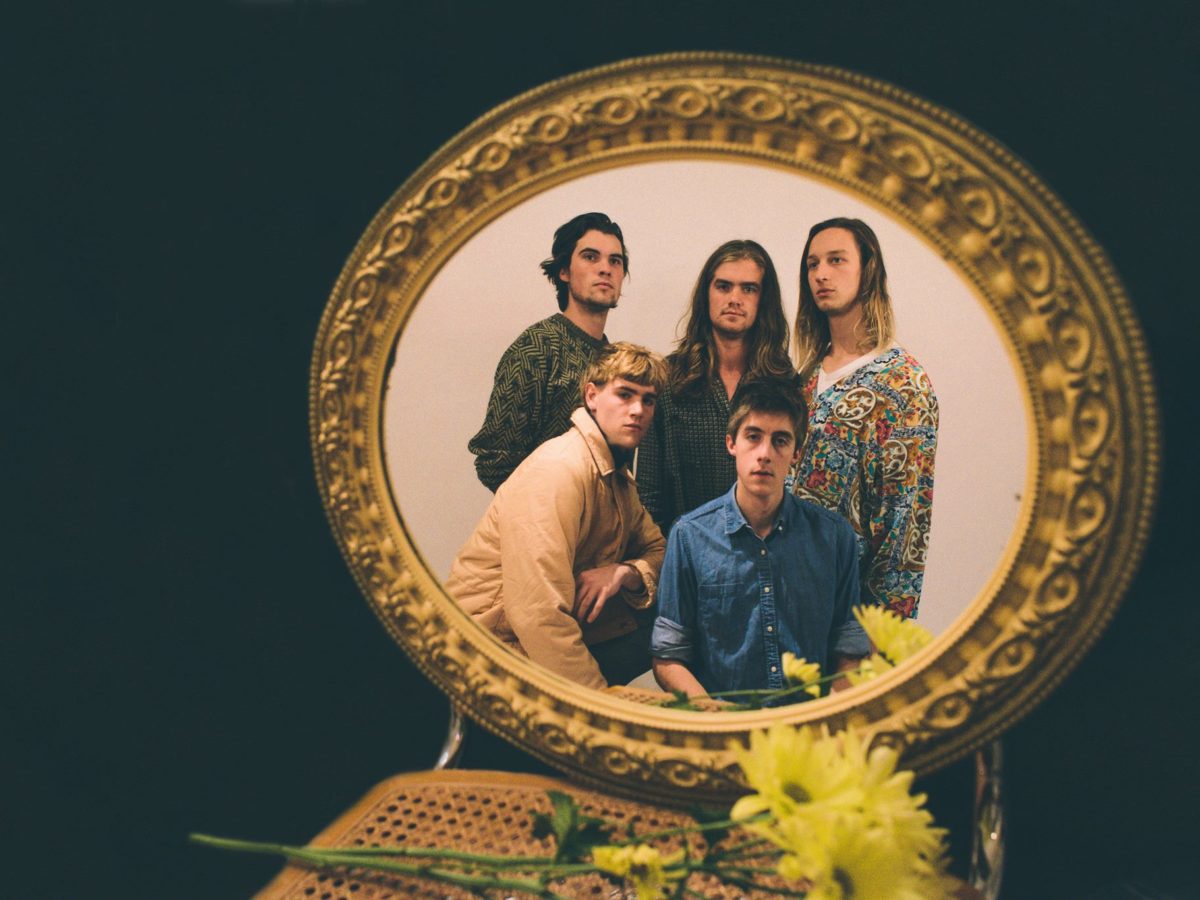 Colombus-based five-piece band Turtle Island premiere today a new single. “Psychic Basement” is shared ahead of their debut album “Flora” that is due for release later this year. We asked them a few questions about their -strange- name, music, upcoming release, and projects.

Turtle Island flirt with psych-pop, shoegaze, electronic, and indie sounds, and should please the fans of Tame Impala, Caribou, and Panda Bear! In a recent interview for Melted Magazine yet, each member of the band had to say what was the first album they ever bought. The answers were Maroon 5, Jason Marz, or even Britney Spears. There’s nothing bad about pop music and we like the fact that they try to bring it further their own way.

“Psychic Basement” is the follow up to “Lights Out,” which was released 8 months ago. Even if the essence of their sound remains in line with this previous single, one can easily say that the band have gained in maturity. The arrangements are meticulously crafted, the groove is here, and the track is definitely catchy and infectious. There are actually 2 versions of the track, whose original one is 8-minute long.

On “Flora,” the band explained that some tracks are in the process for more than 2 years and while listening to this lead single, we truly believe it! Ahead of this debut full-length release, we decided to ask Turtle Island a few questions about what to expect from it.

1) Who are Turtle Island?

2) Can you describe your music for someone who doesn’t know you yet?

We all listen to so many things that inspire us. That definitely bleeds into our music. Whatever we’re listening to or feeling at the moment can affect us. We have been through so much together as people and friends. Our music seemed to evolve simultaneously. A lot of the songs you will hear from us in this stage have a lifespan of many different forms as we discover what our strengths and weaknesses are.

We see the songs on “Flora,” including and especially “Psychic Basement,” as a test or collaboration in trusting ourselves and each other within the comforts of collaboration. In our songs, there is a lot of restraint and a lot of catharsis at once. This often yields either resolute and expected or surprising and sometimes unconventional outcomes for the listener.

3) How did you decide to name yourself Turtle Island?

When we were younger as a band, in our mid-to-late teens, and with only 3 overlapping members to now, we made a bunch of songs together at a lake. You could row out to an island on this lake called “Turtle Island.”

4) How and when did you meet and start to work together?

Joel and Andy played in one band when we were teenagers that split separate ways. At the same time, 3 of us, Sean, Nick, and Dallin, played in a separate project that we called Turtle Island. We were friends with similar enough tastes that we thought we could merge after another old member of the original lineup moved away. Since then and on this record, all of the songs we have written involve all 5 member’s contributions and collaborations. The name stuck because Andy joined originally as a temporary replacement on bass and it seemed to work well. Joel joined a few months later on keys.

5) Can you tell us a bit more about this first single “Psychic Basement”?

“Psychic Basement” was written a couple years back when all of us were first living out on our own. We had a house that 3 of the 5 of us all lived in and wrote and rehearsed in. Somewhere in the fabric of it all floats a memory of demos of this song, and the experience of listening in Sean’s bedroom over his giant speakers. The way the song opens up involves all of us throwing in some of our own little flavors and ideas into the atmosphere. The song has come a long way and has been through so many different iterations, but that original energy is kept alive in the final version.
The name is definitely a bit tongue-in-cheek, but also has a special sentiment to it and fits the lyrics well enough to stick.

6) Is there a resolute meaning in your music or is it the result of pure experimentation?

When we first joined together, perhaps through a mix of laziness and the fun of it, we had a lot of songs that got to a point in which we would say “well let’s just experiment or jam here.” While that was great for a while, it got to a point where it was too unpredictable. Andy and Joel joining the mix pushed us towards consistency. We all wanted to have control over what the song’s movements or dynamics were. That led to a lot of refinement and trial and error, but we also try to keep the energy and surprise of the exercises and experimentation of that nature in the songs on the record. 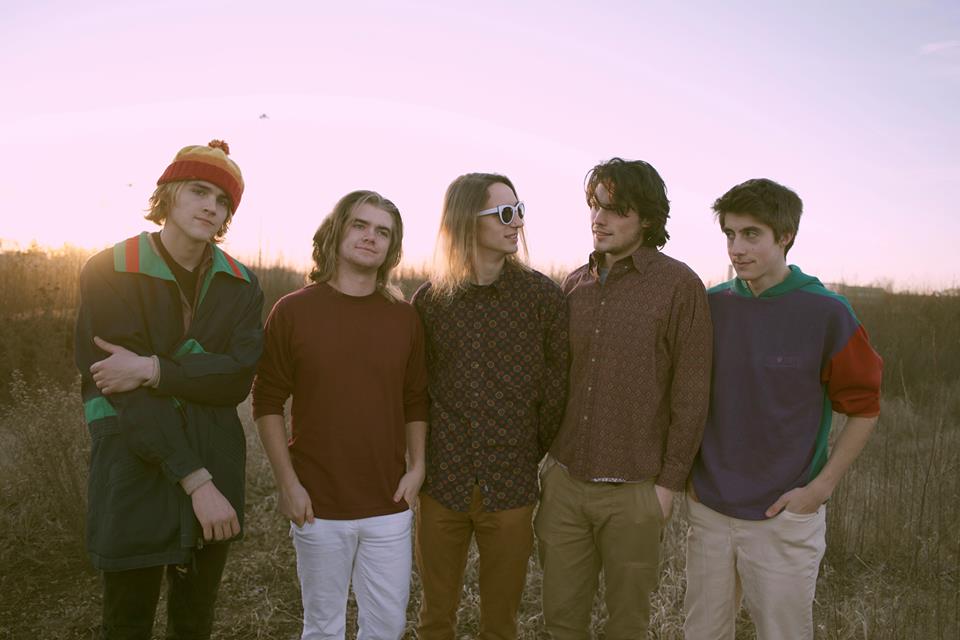 7) What can we expect from your debut LP “Flora”?

A lot of the songs lyrically ended up being self-critical or self-observant. We have written them through a time in our lives where we are first experiencing an individualized lens; being out of the care of our parents. Figuring out our place in the network that culture and society weave inside and outside of our every decision. The wave of consequence that our actions have on ourselves and our surroundings.

What was your creative process for this album?

The songs have been written together in many different environments over the past 3 years. Our writing and rehearsal spaces have changed drastically, from our parents’ basement and spare bedrooms to various unfinished, leaky basements or bedrooms of our own houses in the city of Columbus. We split the tracking process of our album between a studio in town, Relay Recording, for guitars and drums and vocals, and our own bedrooms as we worked on synthesized sounds and samples.

The album started as a live project and has moved through collaboration after collaboration among ourselves as we tried to solidify a unified outcome. Some songs were written the weekend before our first tracking sessions at the studio, and some of them were written a year or 2 before that. Jon, of Relay Recording, did a great job of helping us keep the energy of the songs as they were written, with a consistent sound and pallet throughout the record.

9) What can we expect after the release of the album?

As we prepare to release “Flora,” we have been working on new material inside and outside of the outlet that is Turtle Island. There are videos and artworks, etc. to be paired with the experience of listening. Life is so fragile. Time is so fragile. It hardly feels real. This record, for us, is a tangled vessel of self-love, self-hope, self-hatred, uncertainty, trial, and experimentations in autonomy. We know things about our bodies and minds and hearts now that we did not know before we tried to make this record. All we can hope for is people to believe in us and each other as we believe in ourselves and each other and move forward with this project and all we want out of our lives as human artists.

Stream the two versions of “Psychic Basement” as well as fans’ favorite “Ceilings” via Spotify: