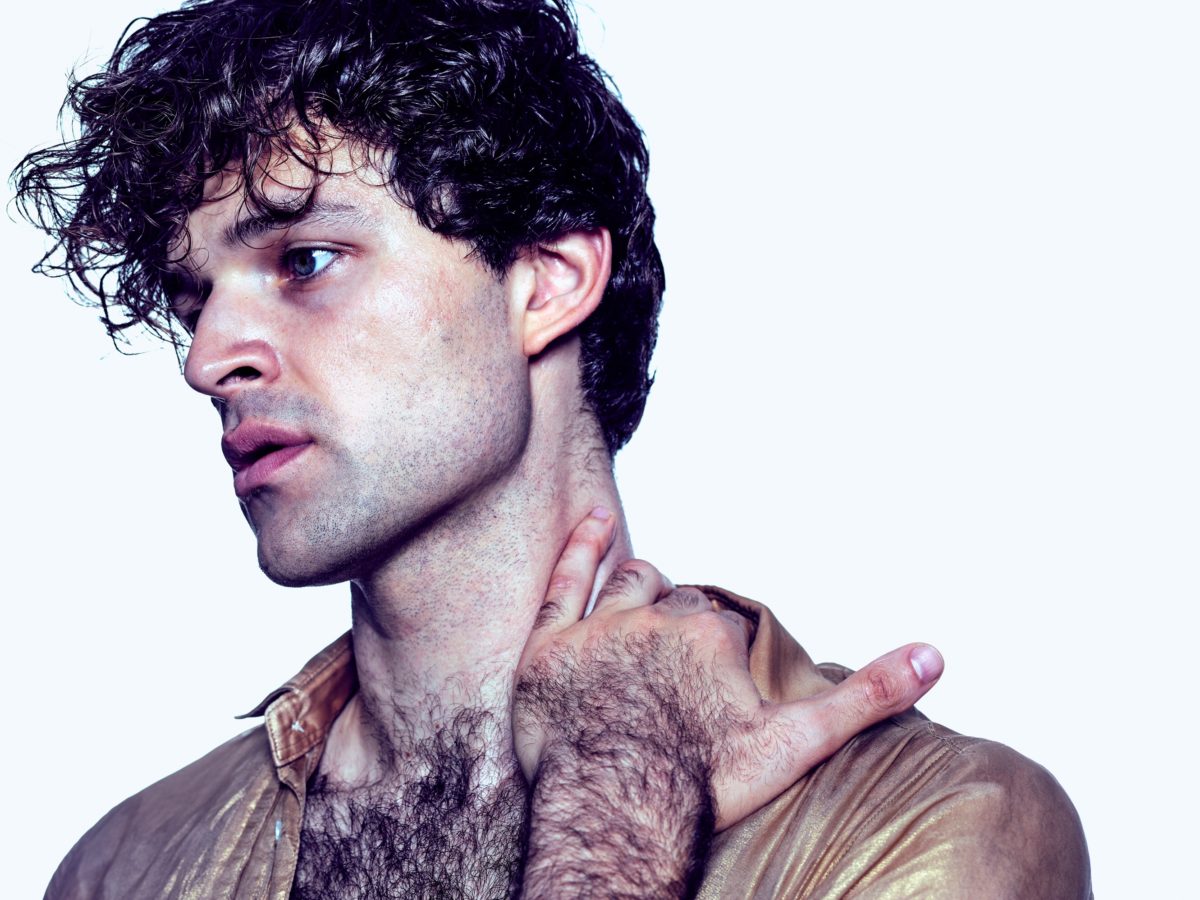 Natti Vogel explores the tensions between actual personality and societal conventions in the video of “I Don’t Want To Find The One” which premieres today on HighClouds. The earworm single is taken from his freshly released debut “Serving Body” EP and we interviewed the artist to know more about him and this fresh release.

It’s difficult to detail who Natti Vogel is cause he has more than one string to his bow. The singer-songwriter, dancer (at least in his new video), public activist shared an infectious indie pop track late 2017 and its melody is still deeply burned in our head. As we premiere today the video of “I Don’t Want To Find The One”, I guess we’re good for another couple months. Indeed, the least one can say about Natti is that this art-pop artist knows how to write and compose catchy melodies. Be ready for some “Ah ah ah ah ah ah ah aaaaah”.

For the twisted video of “I Don’t Want To Find The One”, Natti Vogel has decided to dance on a Jose Rivera Jr.‘s choreography to play an alter ego of himself and to express the conflicts between what he actually is and what the society would like him to be. Even if the artist claims that he was not particularly inspired by David Bowie for the Tiye Rose-directed video (video at Colorlines), we can’t be totally wrong by writing that. The simple yet powerful visuals were edited by the creator of acclaimed indie series “Everything’s Ok”: Ace Salisbury. A real teamwork!

About the video, Natti Vogel detailed:

I fondly think back to that pre-Christmas rush of dancing every day, wondering if we were going to be able to pull it off, having faith anyway, shaving with Haley (set design), bruising my knees and hips with José, battle-planning with Flannery (co producer), and I hope that raw electricity carries to the audience. Our process achieved exactly what we intended to prove: hierarchical, dictatorial, oppressive patriarchy is over, and a queer, mixed, power-balanced team is the future.

HighClouds: Could you introduce yourself for the readers who don’t know you yet?

Natti Vogel: Hi, I’m Natti! I write the lyrics, compose the music, play the piano and sing the songs in the hopes of providing some inspiration, comfort and delight in your life. I hope these songs help you to navigate difficult times and more keenly savor the juicy, good ones. And I can’t wait to hear how they resonate with you and how your stories overlap with them. Shoot me a comment on social media and tell me, I’m dying to hear about that.

“I Don’t Want To Find The One” comes with a simple yet twisted video. Can you tell us a bit more about it?

I play an alter ego of myself who just wants to conform and settle down and make his parents, peers and colleagues instantly proud and happy. He’s gone to the right schools, gotten the right job, found the right partner, check, check, check. He uses his white male cis privilege as society specifically prescribes him to … and yet, there is an authentic human spirit in him that is dying to get out. This video explores the violent friction between that authentic spirit and societal convention. Through my intensive, months-long collaboration with genius choreographer José Rivera Jr., we have surgically mapped the elite cis white male body and located points of tension and release to show this violence in as precise and entertaining a way as possible within a very tight budget. Because the record is called « Serving Body », each corresponding video is committed to documenting the ways in which our bodies themselves relay the drama of society at large.

You really wanted to premiere this video on Valentine’s day and the lyrics of the tracks are crystal clear. Are you allergic to love or to forced celebrations maybe?

I am super in love with love. Love is the reason I choose to exist. It’s my m.o., my gift of choice, my raison d’être, etc. In the chorus of « I Don’t Want to Find the One », I sing: « isn’t love enough? » isn’t it? Shouldn’t it be? Deep down we know it is. I am here to fight barriers to love, and I have noticed the forced pressure to couple debilitates and strangles love. This Valentine’s Day, I urge you to get down to this bop, the song and the video, and celebrate love in its MANY forms ALWAYS – as Outkast says, « everyday the 14th » – not the pressure to conform to narrow definitions of it. Celebrate the way you love your literal neighbors, your friends, your barista, your colleagues, the fruit vendor, whoever you can summon it for. That’s more than enough. I’m romantic as fuck, and I personally know for certain that I am not at all built for polyamory, but it works well particularly for my queer female friends (sample error? tbd). And the best couples I know – including two of whom I married as an officiant – met after at least one of them gave up completely on finding the one, so I think the message in the song can be cathartic for anyone. 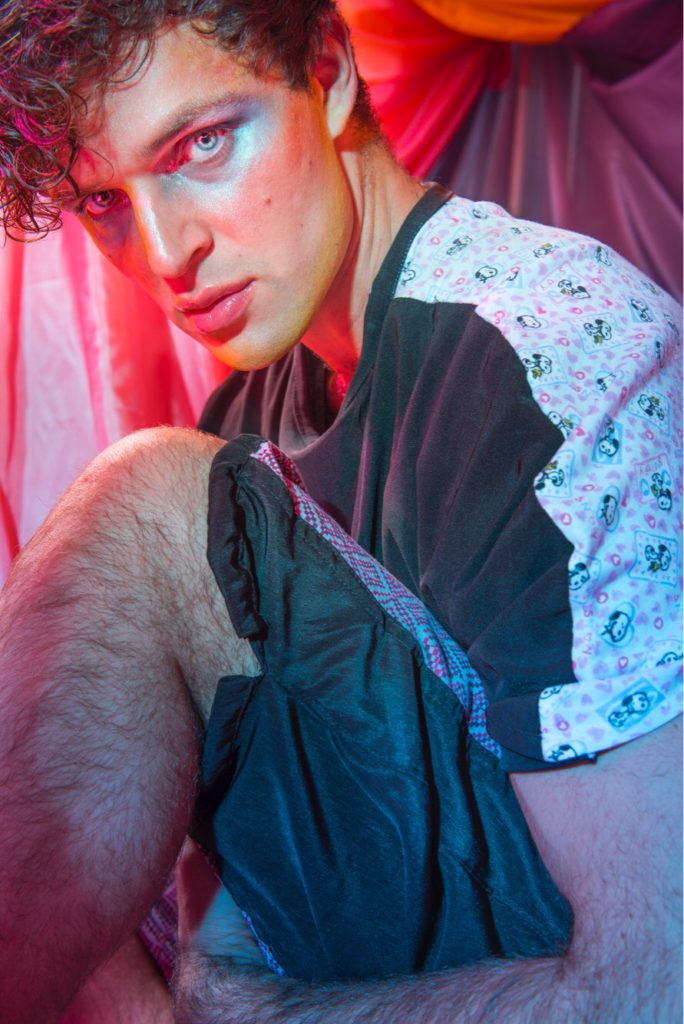 Your video (and your music at times) obviously nods to David Bowie’s career. Who are the persons who inspired you musically and personally?

Interesting! I did not intentionally nod to Bowie in the video, I just think maybe it’s difficult not to remind people of Bowie when you’re also a tall, slim, queer, white, January 8th-born Aquarius-rising, genre-bending theatrical singer-composer with dramatic facial features.

Interestingly, Bowie’s progressive spirit and fearless commitment to vision inspires me daily, but I have always been far more emotionally connected to the music of female singer-composers growing up: Erykah Badu, Joanna Newsom, Björk, Tori Amos. I mean “Mama’s Gun”, “Have One on Me”, “Medulla” and “From the Choirgirl Hotel” are objectively perfect masterpieces.

We know you’re particularly engaged as an artist. You’re not afraid of claiming that “oppressive patriarchy is over, and a queer, mixed, power-balanced team is the future”. Where does this engagement come from?

So, surprise: I’ve actually been a public activist for years longer than I’ve been a public artist! Literally no one in the music industry could ever take that ethos away from me, because I learned that culture was politicized firsthand since I was a middle-schooler working to change the name of my elementary school from an institutional racist to the first black female principal to preside over a predominantly white student body in the Northeast (then Louis Agassiz, now proudly the Maria L. Baldwin school). I didn’t get featured in the pages of Teen People magazine then because I had cute jeans to sell (no shade to cute jeans), I was there because I was fighting to right historical wrongs. My medium may have changed, but my mission has not.

2018 already feels approximately 8.8 times busier than 2017 and we’re only on February! A new song and an intense music video for Brown Rice (track #2 off Serving Body) are both coming out just next month so definitely subscribe to the YouTube and follow on Spotify and SoundCloud to be the first to hear and watch!

Natti Vogel will be playing in Williamsburg, Brooklyn on February 23. Tickets can be purchased there.