From Rebel Girls to Dancing Queens

I don’t believe in coincidence. As I was taking the subway to hear a lecture on music and its role in the lives of the LGBTQ community, a tune randomly popped up on my Spotify shuffle mode: “Smalltown Boy” by Bronski Beat. To many of my straight friends, it’s a nice tune with a good eighties beat. Sadly to Kate Ryan, plastic queen of Eurodance, it’s a good song to turn into a cringe-worthy ballad. But to me and queers around the world, this song is a true anthem of gay liberation. Why is that?

The 19th-century bourgeois queer needed the dimly lit opera to hook up, the sixties homo allegedly loved a good Judy Garland concert to get some action. They needed the codes, the non-explicit language that music is, to tell the other that he was gay*. But what about 2016? Does the western gay still need disco to tell another man he’s gay and wants to grind until the night is over? Surely not. The codes that were passed on earlier – Judy, Liza, Barbra, Bette. These are names I shan’t forget – seem outdated, a thing from an oppressed past. Who is passing the torch now? I can only hope for the best, now that artists like Mykki Blanco or LE1F are taking over the limelight.

What makes Bronski Beat gay, apart from the sexuality of its singer Jimmy Somerville? True, it’s the lyrics, the voice, the video. But could there be something more? Does it fall into the same category as Judy Garland, Kylie Minogue or Peaches? I believe it does. I asked Marion Wasserbauer what the deal was. She is an Antwerp-based Austrian who is currently writing a Ph.D. on queerness and music. Is there such a thing as gay taste in music? The youtube playlists she made with the musical preferences of her interviewees suggest there is:

“I’m researching what music means in the lives of the LGBTQI community, for the individual and the community as a whole”, she says. “I have talked to gays, lesbians, bisexuals and trans people to hear their stories about their music.”

“It’s striking how much the people I interviewed sought recognition in music. Whether they recognized themselves in the lyrics, the sexual orientation of the artist or even in the voice timbre, my interviewees marked ‘seeing themselves’ as an important factor in their taste in music”, she says. But surely, there must be something more. Personally, I don’t instantly recognise myself in the lyrics of a Rihanna song or a Eurovision ballad, but I can recognise a gay song when I hear it. How is that?

Gayness is, in other words, more than just two (or more) men having it off. Journalist J. Bryan Lowder wrote in his wonderfully fabulous essay “What was gay?” that: “Gayness also comprises a set of markers, values or practices that manifest themselves in the spaces, objects and relationships that gay men create”. (…)

“Gayness may be found not just in whom you sleep with, but also, perhaps, in the sort of sheets you insist on sleeping between.” Or dance to on a Saturday night”.

Music is very much linked to identity and memory. Who doesn’t remember the first piece music they bought, kissed to, lip-synched for their lives to. Marion suggests that music is as important for straights as it is for our community. But I beg to differ. Music makes the people come together. Music was and is the backdrop on which gays met other gays, celebrated life, sex and shared hardships. Gayness is real and it’s (a) musical.

*I am fully aware that this text is very male-gay-focussed. I could not help but wonder whether the answer to the questions asked in this text would be the same if I had looked at lesbian or trans case. And, as a member of the audience quite aptly remarked, the music described here and in the PhD is very Western. How about non-Western cultures? Do they have the same kind of tradition? 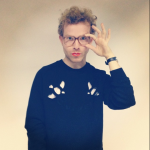