search in the clouds
October 13, 2016 Interviews, The Files 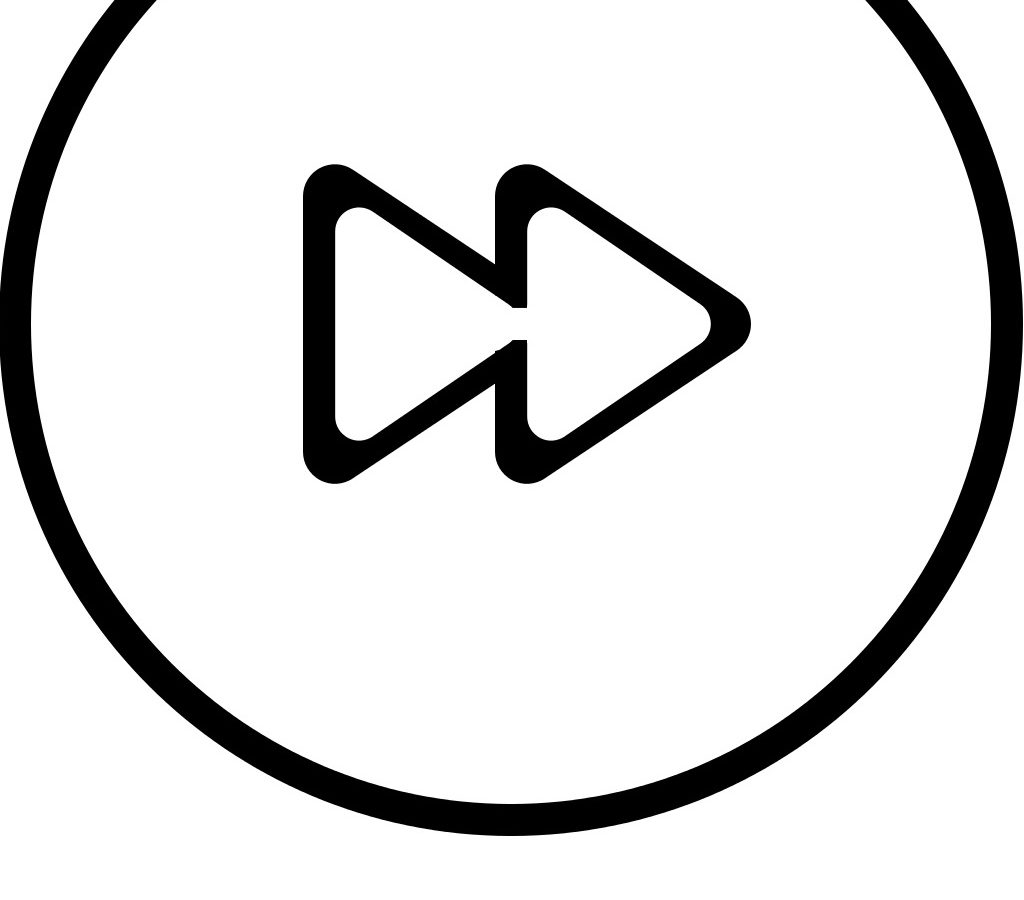 Let’s discuss the music streaming industry a bit: its current actors, its challenges, and how a startup named Resonate is trying to start a fair and needed revolution for an annual subscription of $5.

From the big major labels’ golden years to the internet revolution, music consumption has drastically changed. Today, anybody, anywhere, armed with internet services, can easily flip through the catalog of any artists, from the past until now. The experience has never been that rich for the users and that is undoubtedly why they have changed their habits of music consumption.

While music streaming services are seeing an increasing number of users, the singers, songwriters and producers are being paid less and less

It looks like the transition from buying tangible materials to downloading and then streaming dematerialised ones has eroded the money machine. Admittedly, transition periods are not always easy for industries but it looks like the majors have particularly lost the control since the internet revolution. The music streaming business has now reached a level that deserves appraisal but there have been notable hiccups.

The music streaming market has constantly grown in terms of users and that is probably why investments have massively flown. There have been both dominant and new names entering the market. The most famous actor of the industry right now is the Alphabet Inc-owned – read Google – company YouTube. Indeed, it has up to a billion users and most of them are watching and streaming audio and music videos for free. Despite the fact that YouTube pay billions to the music industry, there is a consensus from the artists, record labels, music publishers, and managers that this is still not enough. YouTube is accused of killing the music business.

SoundCloud, a global online audio distribution platform based in Berlin and created in 2007, is the other main platform that enables users to stream music for free. Like YouTube, the popular user-focused streaming music service enables each user to upload content online. The problem is that some uploaders don’t respect the copyrights and throw content that they don’t actually own. The poor copyrights remuneration and the problems caused by the uploading of content without any permission are not pleasing the stakeholders. Despite billions of users, YouTube and Soundcloud have often been labeled as the worst things to happen to the music business since the tsunami caused by the peer-to-peer file sharing services in the late 90s.

Times have passed and we have observed the entry of companies like Spotify, Tidal, Deezer, Apple, Pandora, and even Google into the market. The industry is super competitive and the opportunities are big. As the streaming seems to be the future of music consumption, not adapting your business model to this new trend could be fatal.

Most of these new business models are based on a monthly subscription of $10 (and free accounts with intermittent advertisements. Tidal, which was launched by Jay-Z and his army of stars, is positioned as a provider of exclusive content for the elite-music lovers. You can opt for the “high-end HiFi” option if you are eager to pay $19,99 per month. Yesterday, Amazon announced its own on-demand music-streaming service called Amazon Music Unlimited and might cause a price war with three rates between $4 and $10.

And here comes that part of every article where the writer really has to sound concerned; and I sincerely am! It is interesting to see the range of choices getting bigger and rates with a downward trend. Nevertheless, since the inception of the music streaming industry in the early 90s, the major problem has always been the possibilities of paying royalties commensurately to the right owners’ stake while making some profit. Free streaming or monthly subscription: the problem almost remains the same…

On the creators’ side, cost saving strategies can’t be applied. Indeed, the artists, producers, are already poorly paid if they are… On the other side, the majors, that were the only ones on the disc market, have to share and negotiate their revenues with the Tech Giants that recently entered the game. Both Google and Apple reported to have paid up to a billion dollars to record labels but it doesn’t compensate for the record sales collapsing. As a consequence, the royalties seem to reduce proportionally since the major tech-based music service companies are negotiating from a point of strength. In the past, an artist could expect to earn a bunch of bucks from the sale of an album. Now, as you can see in this infographics shared by Billboard, it’s a whole new story. (check the full article there). This is simply for this reason that the artists are now heavily touring and that the average price for a concert has exploded. 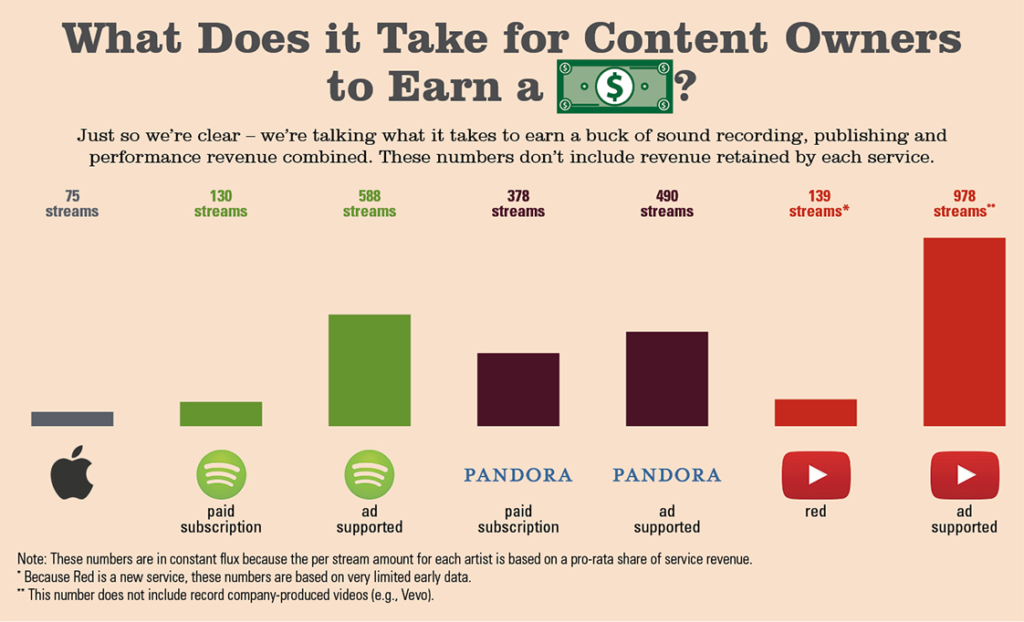 Competition never got tighter in the industry and things are evolving quickly. Amazon entering the market, Soundcloud which could be bought by Spotify: every day, big announcements are made but still, nothing seems to concern the stakeholders’ remuneration or “the real challenges”. Despite the presence of technological companies on the market, some important (r)evolutions, like the use of a blockchain to manage and automate music metadata and licensing, are still needed. If you don’t what the blockchain is, you should read this this article, and this one too.

I recently discovered an outsider standing out amongst the music streaming providers: Resonate. This startup, which is actually still in a development phase, prides itself as a music cooperative where all the stakeholders are owners and as well, run the company equally. The customers, the fans, the musicians, and Resonate’s staff have all one vote each for the main decisions and one share of the potential profit.

Resonate’s ideology is seen in its traditional aphorism “Shouldn’t ALL musicians own their music streaming service, not just some super-rich rock stars”?

Besides this interesting concept, the company takes the gamble to catch up the technological gap while proposing better remuneration rates to artists and different stakeholders. Obviously, this project caught all our attention and this is the reason why we contacted Peter Harris, the ambitious and visionary founder of Resonate.

1) Hi there! Can you present yourself and how the idea of Resonate came to your mind?

As a web developer and musician for the quite some many years, I tried all of the other services, always feeling like they were missing something. While always building sites for other people it was always in the back of my mind that maybe someday I’d have a great idea. Think that has arrived with Resonate. Combining the cooperative business model (so everyone is an owner) with a bunch of new ideas to make the connections between fans and musicians much more meaningful.

2) In which stage of the development process are you currently?

We’ve made tremendous progress on a number of fronts and now it’s time to go into hardcore development. For that we’re gonna need a budget, so that means… crowd campaign time!

3) Who Resonate will be designed for?

It’s equally for musicians, indie labels and fans. While it’s hard to say that any one particular group is the focus, I’d have to say that the emphasis is on the artist, because they’ve been shut out from the process all these years.

4) In your opinion, what are the two main assets for someone who would use Resonate to listen to music?

The knowledge that their money is going directly to artists and that the transactions are completely trustworthy. Since we’re going to manage that aspect in a blockchain there won’t be any dispute about what gets played and what gets paid. From there it’s going to be the numerous ways we’ll connect fans and artists. Prepare to be amazed.

5) Same question but from the artists’ perspective?

It’s easy to reverse the answer… that for once we’ll have a system that can’t be disputed in terms of it’s fairness. Not to mention being able to plug in virtually any service or add-on that artists want to offer their fans.

6) What are the real challenges that the industry has to face?

Updating their technology. It’s ridiculous that in this day and age it can take years for an artist to get paid for certain usages of their music, or that payments are being tracked and paid for using so many out of date methods.

7) We know that big actors of the industry fail to make profit despite an increasing amount of users. Does the music business actually have to make profit? Was the “major golden age” era just an exceptional period?

It’s not just a question of profits, but sustainability. Based on Spotify royalties a fan has to stream the same song 150 times for the artist to make the same as a single download. Personally, I want some of my favorite artists to not be distracted by day jobs because that way they’ll make more music! The only way that happens is if we find ways for them to make a sustainable income. May not entirely be through streaming, which is why we’re going to connect in a lot of other services to help boost their income.

8) Recently, we heard that Soundcloud could be bought by Spotify, that the new business model of BitTorrent already failed after 3 months only, and that Amazon was also entering the market… What do you think of this news? Aren’t you afraid of the size of the current actors and the quick evolutions on this market?

Honestly, I hope the sale goes through because that will leave just Bandcamp and Resonate as indie alternatives. Ultimately there will be more consolidations and acquisitions to come because the $10 a month streaming model isn’t working for anyone. After all, Spotify still hasn’t made a profit. So yes, I think there is a LOT of room for an alternative.

9) If we properly understood, Resonate is a cooperative. What does it mean? What would happen if one of the big actors of the industry decides to buy you in 12 months?

If someone offered to buy us, the community would have to vote to approve it. Wouldn’t be in my control. Personally, I’d vote against it because I think this is the only way to slow down the vacuuming up of the planet by giant corporations. Doesn’t seem likely that the community would vote to end the service as they know it, or cut themselves off from profit-sharing and being able to vote and participate. All features of cooperatives that don’t exist in regular corporations.

This article can sound a bit like a sponsored one but it is not the case! We are just aware of the situation and impressed by the ambition of Resonate. For $5 per month only, this affordable new way of consuming music seems to be fairer for the artists and all the persons, like songwriters and producers, who are even less retributed. We are not the only one to be interested in Resonate as 680 musicians and 91 labels have already supported the platform.