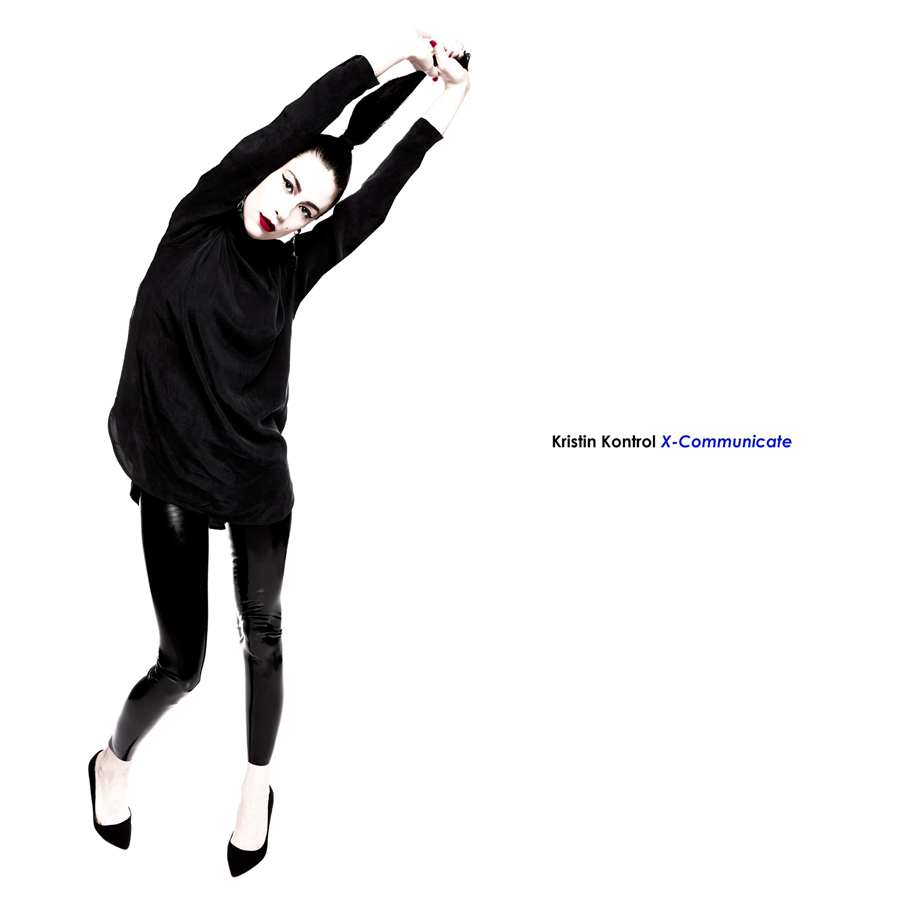 The 33-year-old singer, who lives on the Upper East Side in NYC, has worked with Kurt Feldman (Ice Choir; former member of the Depreciation Guild and The Pains of Being Pure at Heart) and Andrew Miller to distance herself even further from her previous work. The garage and lo-fi sound of her band totally faded out to make room for a polished electronic sound that picks up where Dum Dum Girls stopped. A lot of space is given to 80s pop sounds but on some tracks, the influences are contemporary.

Where Dum Dum Girls paid tribute to the indie pop of the 60s/80s, Kristin Kontrol‘s “X-Communicate” picks up exactly where the band stopped and fiercely embraces pop music from the 80s ’til now!

Kristrin Kontrol‘s synth-pop covers a wide spectrum, ranging from 80s beats to modern tunes and the guitars now provide the punctuation on instrumentals while synths reign as queens! The artist’s influences span new-wave, R&B, synth-pop, krautrock, post-punk, and even reggae. The opening song “Show Me” features lyrics such as “Show me what you’re capable of”, as if this new positioning and this new project were also a test. By the way, the song and its saxophone remind us of Carly Rae Jepsen‘s transformation on her last effort “Emotion.” A feeling that often comes back while you listen to “X-Communicate.”

As the singer explains in the press release:

“The first music I felt was mine was classic 80s pop and 90s R&B, from Tiffany and Debbie Gibson to Janet Jackson and Madonna, to TLC and SWV… But for years I was hellbent on the rock’n’roll thing, revering Joan Jett, Patti Smith, Chrissie Hynde… but with Kristin Kontrol I just wanted to try it all….I thought I’m Kate Bush covering Mariah.”

With “Skin Shed,” the metamorphosis is obvious: the artist emerges from her cocoon on a euro-dance inspired anthem that Ace of Base could have released in the 90s. When you listen to the album and the self-titled first single “X-Communicate”, it is almost impossible not to link it to Madonna in her early career. On this highlight track, the sound is more mainstream, confident and outgoing. The beat of the drum machine is pulsing and the keyboards and attitude are reminescent of an MTV video from the mid-80s.

The album, whose lyrics mainly deal with love (and change), also includes several religious references, that make a direct link with the Queen of Pop. “(Don’t) Wannabe”, the second single off the album and the favorite of the artist for its production and level of songwriting, is the best example as it is partly addressed to Jesus Christ. Amen!

On the ballad “What Is Love,” whose introduction is strangely similar to Prince/Sinead O’Connor‘s anthem “Nothing Compares 2 U”, Kristin Kontrol asks the question but finally give any answers. As she sings it, she just needed a change and this is a balance. The lyrics, on this effort, are often too simple and therefore, are not the strength of “X-Communicate”. Some tracks, such as “Face 2 Face”, suffer from this weakness. Interestingly, the weaknesses can be heard on tracks that are the closer to Dum Dum Girls sound.

Speaking of which, what is the fate of Dum Dum Girls? Have they disappeared forever? According to social media, Kristin Kontrol has replaced them for good. It looks like the artist has not only started a metamorphosis; she is already a new butterfly.