A whistle blower for peace who brings powerfully charged and soulful pop, that’s how we can describe Naomi Pilgrim. After her critically acclaimed self-titled EP, launched in 2013, she only continued to grow in music and as a person with her later release “House Of Dreams”. We are now early 2016 and Swedish-over-Barbados singer Naomi is back with her statement single “Sink Like A Stone”.

Co-written by Henrik Jonzon (renowned Chicago-born Swedish songwriter), this song is inspired by the racist death of Eric Garner in 2014. Although the song starts on a reflective darker note it quite quickly bursts open into a strong, will-full track, reflecting on our society and its inequalities, awakening our power to change things around. The full “Sink Like A Stone” EP will be released on June 3rd and will be Naomi‘s most forceful piece of work to date, using her impressive voice and skill full music to denounce and fight our world’s drift into the wrong direction. This album won’t leave you unmoved, as it reflects both the at times scarring and at times sweet experience Naomi went through while writing these these songs.

“The Sink Like A Stone” EP, which will be released on June 3rd on Cosmos Music. 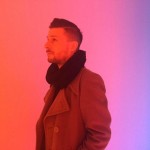