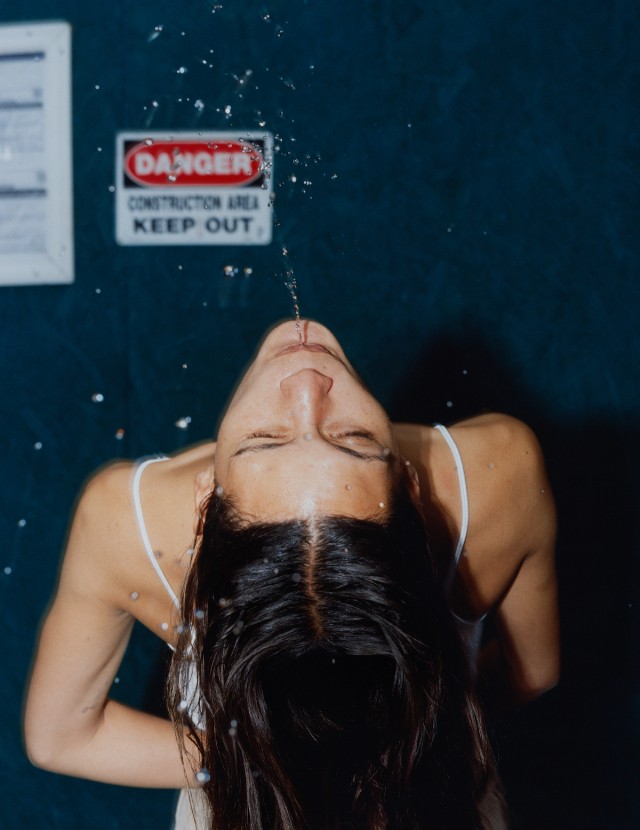 Okay Kaya releases “Baby Little Tween”, a new single taken from her forthcoming sophomore album Watch This Liquid Pour Itself, due out January 24 on Jagjaguwar. [Pre-order]

From the watery depths in her last single “Ascend and Try Again” to the heights of a stratovolcano in “Baby Little Tween”, New York via Norway alternative pop singer-songwriter Kaya Wilkins AKA Okay Kaya has explored the expanse of Japan through raw video footage.

“Baby Little Tween” was shot on location in Niseko, Japan, on the vast Mount Yotei, aided by Okay Kaya’s frequent collaborator Adinah Dancyger. However, unlike the intense slow-motion close-ups of Kaya Wilkins naked form that was on display in “Ascend and Try Again”, “Baby Little Tween” places the loftiness of Mount Yotei and Okay Kaya’s decidedly wrapped up figure at the forefront.

Despite the visual differences, the video for “Little Baby Tween” possesses the same rolling sense: a ponderous ebb and flow that comes from the motion of Okay Kaya as she traverses the mountain on skis. The camera work dips in the right places to create a delicious tension; the stillness of Wilkins gaze, when intercut with the moving skiers, is pleasantly jarring.

The video has a short clip at the end titled “There is a River” and features Okay Kaya voicing a stream of consciousness style monologue over shots of a Japanese city at night. This spoken addition feels like a Brett Easton Ellis composition in the way that it has that teenage apathy and a languid nature.

This clip is preceded by Okay Kaya cutting off a portion of her braid that’s attached to – what we can presume – is a visual representation of her “tween” self, in the form of a head shaped cushion entwined with her braid.

From a musical perspective, the track demands attention from the deep and resonating “Ahh”’s overlapping one another at the beginning. The resulting sound holds the same kind of reverence and respect that religious buildings have. It brings to mind the commanding presence of a church choir booming. This opening harmony sounds like a call to directly to the listener to truly be present for the track.

“Baby Little Tween” is overarchingly an interesting exploration of what it’s like to look back on your younger self. With lines such as “surfing in the mids” – referring to mid-’20s or middle-aged – and “doesn’t know shit”, Okay Kaya explores that teenage arrogance of always being right and thinking you know everything about everything. She also covers the realisation that comes as soon as you grow up: no one knows anything and we’re all sort of scrambling along.