Olivia Barton – “I Could Have Smiled at You More” 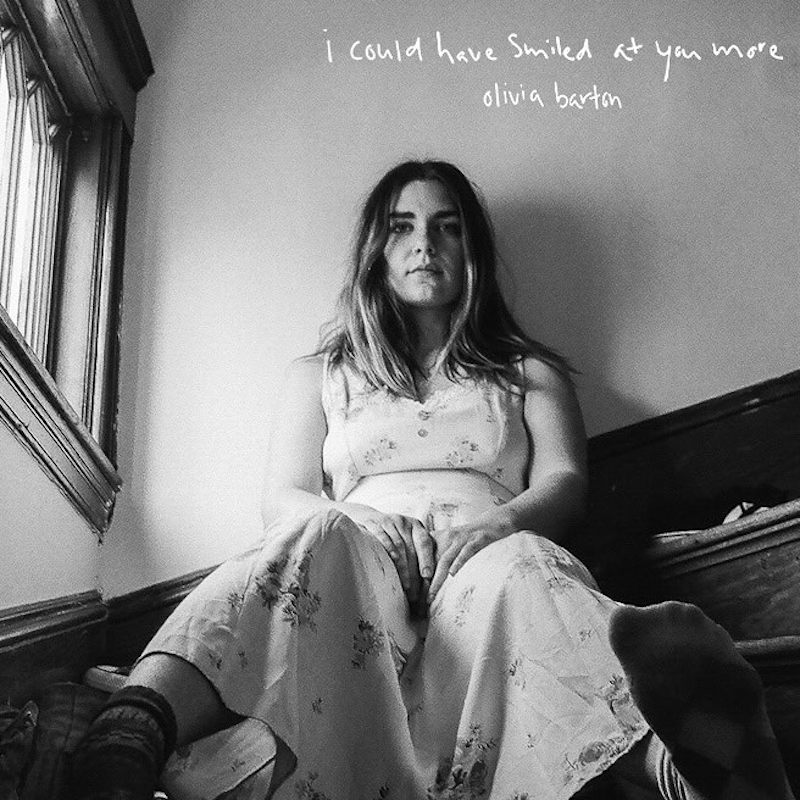 Tampa-born, Boston-based singer-songwriter Olivia Barton tackles tough subjects on her stunning self-released debut album I Could Have Smiled at You More.

Maybe you haven’t heard of Olivia Barton. However, after listening to the Tampa-born, Boston-based singer-songwriter’s newest release I Could Have Smiled at You More, Barton won’t stay a stranger for long. Not only will her music gain a permanent spot on your rainy day playlist, but it’s certain that listening to this stunning debut album will feel like a conversation with an old, familiar friend.

At a distance, I Could Have Smiled at You More appears to be a classic, folky, ultra-acoustic breakup album we’ve all encountered before. Barton seems to prey on listeners’ expectations for a tired rendition of love lost and instead provides a nuanced view on the breakdown of a real relationship. In challenging norms, she succeeds in the formidable task of accurately portraying the melancholy of heartbreak without ever fully to surrendering to the pitfalls that many young singer-songwriters fall into. Barton stays specific without ever becoming unrelatable; she delivers universal truths without reverting to exhausted cliches.

The success of I Could Have Smiled at You More is hinged on Barton‘s ability to embrace a quiet but all-encompassing chaos. Because truthfully, I Could Have Smiled at You More is a messy album filled with contradictions. On opening track “If You Say I’m Special,” she laments, “I lost any dignity / I might have learned by this age / C’mon, baby , dig in deep / At this point, it’s all fair game.” However, on the next song “Thursday”, she’s clear-headed and mature, quipping, “I’m glad we’re choosing ourselves over each other / It has its ups and downs / But I know it’s the truth.” The duality here is palpable: This is a woman who can switch from being palpably immature to impossibly poised within one track change. The conflicting themes don’t stop there: She’s briefly lovelorn, commiserating on “James Taylor” as she frets, “I could’ve been more patient / I could’ve been more gentle / And I’m sorry for the times that I assumed you were my job.” Then, she yo-yos to biting insults. Bitterly, Barton sings on “Southridge,”, “You’re the guilty pleasure / I let fall through my logic.” Finally, in an album that seems to center around incredibly complicated thoughts and feelings, she has the nerve to proclaim, “My love / It was that simple.” Though Barton shifts sporadically between hard and soft, happy and sad, satisfied and sulking, the album never feels disjointed. Her ability to connect disparate and difficult moments and memories serves as the golden thread that holds the album together.

This talent comes in handy throughout, as the same knack for controlled chaos helps to catapult the musicianship from good to spectacular. There is an eclectic range of sounds packaged within this eight-song behemoth. The album gains easy comparisons to the likes of sadcore indie singer-songwriter Julien Baker, or Baker‘s boygenius bandmate Phoebe Bridgers. Her strongest moments vocals compete with the prowess of Sun June‘s glitter folk lead singer Laura Colwell and even all-star vocalist Margaret Glaspy. In fact, in flashes, it’s almost easy to mistake Barton for soul-pop icon Sara Bareilles (her early stuff, of course). Some of the influences for I Could Have Smiled at You More seem less obvious, but are hinted at in the tracklist; two of her songs are named after country star James Taylor and British indie rock gods Bombay Bicycle Club. Clearly, Barton is a well-rounded student of music, allowing her to become a master in her own right on this debut.

For the most part, this variety of influences results in an interesting, intriguing project. However, some songs seem to lack the inspiration in instrumentation that drives standout tracks like “If You Say I’m Special” and “Thursday.” Songs like “Bombay Bicycle Club” are poorly produced– almost bordering on demo-like production. Though Barton is a capable enough performer for her talent to radiate through the rawness, it seems out of place on a record that is pristinely produced in other places. That said, “Southridge” and “Puppeteer” drip with overdone flourishes and embellishments, almost leaning into the canned tinniness of Christian rock or bottled pop. With the addition of banjo, AND cello, AND violin, AND that trademark galloping guitar, sometimes the chaos seems to control Barton rather than the other way around. In future projects, perhaps we’ll see the young singer-songwriter brandish her power even better.

Even on weak moments (and it’s difficult to even describe them as weak at all, but simply not as strong as others), Barton‘s lyrics are what keep the project afloat. Her words stun and surprise, simultaneously opening wounds and bandaging them up again. The album is best listened to sitting down, as some lyrics cut so deep as to make one dizzy. Maybe you haven’t heard of Olivia Barton. Change that.

Tags:I Could Have Smiled at You More, Olivia Barton