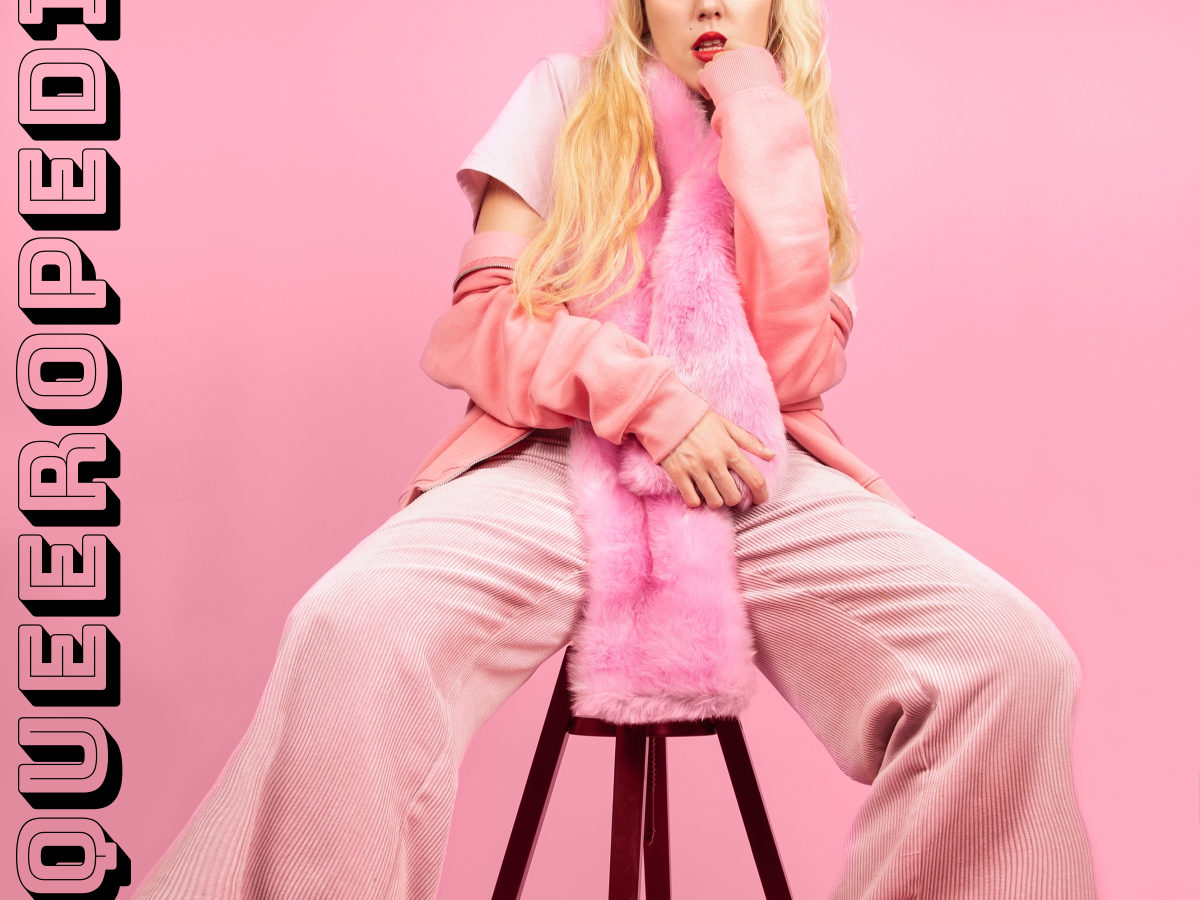 Foxgluvv’s dreamy, glitzy pop music and high femme aesthetic made us fall in luvv. Lucky for us, she’s the curator of our March Queeropedia playlist.

In 2017, Imogen Davies was studying songwriting at ICMP in London, but mostly keeping the songs she’d been writing there to herself. After spending some time discussing the role and importance of authenticity in music, she realized the reason she hadn’t yet shared her acoustic singer-songwriter-style music with the world: she didn’t connect with it. It was then that she realized she needed to be true to herself in her art. She decided to start writing the music she wished she would have had growing up, and it came to life as dyke pop princess Foxgluvv.

Her first single, “Crush,” dropped in April of 2017. It’s a dreamy, lo-fi ode to that type of aching, fast-falling love that so many queer people experience.

“I wrote ‘Crush’ with my long-term friend, flatmate, and collaborator, Scott Colcombe. I had a few ideas for the song that he really helped me bring to life,” she told HighClouds. “‘Crush’ is about unrequited love, specifically aimed towards meeting somebody at a party and wanting to be theirs. We wrote the song pretty quickly in one session, and from there we continued writing and working together more frequently.”

On her first single of 2018, “Not Cute,” Foxgluvv leaned further into one of her favourite aesthetic inspirations: 1980s pop glamour. The track pulls together bouncy synths and a downtempo drum machine for a retro feel reminiscent of a laid-back Madonna, who coincidentally is one of Foxgluvv’s biggest inspirations. “She’s just so badass and unapologetically herself, which is so inspiring for me and really drives me to be me within my work,” the artist told HighClouds. “Not just from an artist’s perspective, but as a woman.” In case you were curious, her favorite Madonna album is The Immaculate Collection, a greatest hits album (“It’s a greatest hits for a REASON. It collectively has my favourite Madonna tracks on, so how can it not be my favourite?”)

Foxgluvv started off 2019 with the release of “Expensive,” a single that pays homage to the pop princesses of the 2010s. It starts out with a watery synth, tinny hi-hats, and the lyrics “Wanna act like a brat / wanna be so expensive / think I wanna drink my weight with my breakfast.” It calls to mind Electra Heart-era Marina and the Diamonds or a DIY Charli XCX. Given her three major Leo placements (rising, moon, and Mars), it’s no surprise that Foxgluvv has a flair for showy looks and spoiling herself with the latest fashion (at least, in her mind). The music video features Foxgluvv and drag queen Heiress Blackstone daydreaming about blowing stacks of cash on gaudy fur coats and a sparkling tiara while they work the counter at a secondhand store.

In August of 2019, she dropped the first single from her I Never Felt Hollywood EP. The track is another Madonna-inspired bop, aptly titled Desperately Seeking Susan after the 1985 film starring the Material Girl herself. The track is unmistakably queer. When the music video was released, Foxgluvv told Gay Times that “Susan” represents that picture-perfect rom-com love she thought she would never experience because of her sexuality. The use of she/her pronouns to refer to the object of Foxgluvv’s affection in the song is powerful; while it’s becoming more normalized for queer women to write and sing love songs that are obviously about other women, it’s still far from the norm, especially in mainstream pop. The video shows Foxgluvv in a variety of classic Madonna looks, sunning on the balcony, and lounging in what’s possibly the world’s pinkest bedroom.

The EP’s second single, “Rumour,” was released a few months later in October. It uses Foxgluvv’s signature retro 80s vibe to tell a timeless teenage tale about gossip and the power of perception. It’s no surprise that the artist also finds inspiration in the work of John Hughes: “When I was growing up I watched a lot of 80’s films like The Breakfast Club, Pretty in Pink and Sixteen Candles. I know, such a cliché to watch these as a teen, but they’re classics!”

I’m currently loving badass womxn in music, but when am I not? These queer bops are what I’m loving at the moment, shared with you to make your day a little bit gayer! Let’s support LGBTQ+ talent always, follow any artists on here that you love 🙂

Check out Foxgluvv’s Queeropedia playlist via Spotify below (also available on Apple Music).