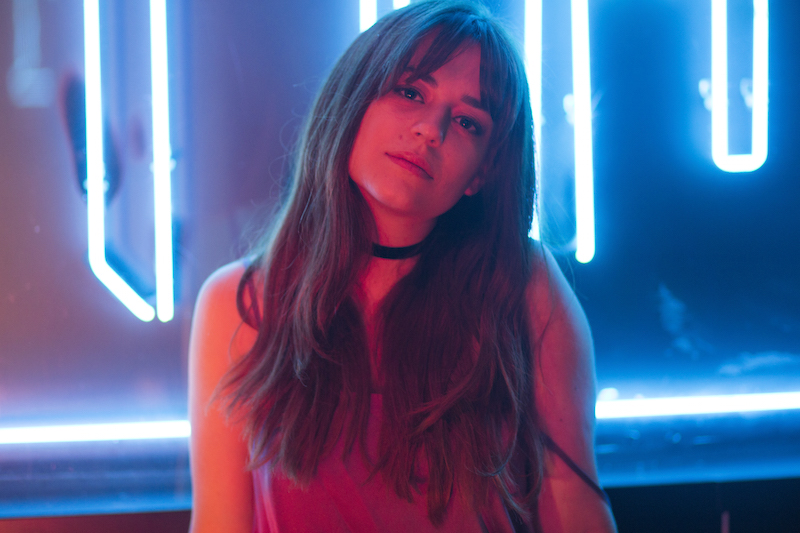 As the release of Dominique‘s debut EP is coming closer, we are getting more and more excited! Personally I ran into her thanks to the electric track “I Think I’m Fallin” where her approach of electronic sounds and pop vibes was one of the most captivating I’ve seen in a while in the overcrowded genre of alternative pop. After that discovery, the artist and my love for her just continue growing. She has now unveiled her brand new track “If I Could Go Back” where she emphasized her true love for 80’s synths.

After the release of the melancholic “Good Girl” and the straight-forward “Love You Better,” Dominique is dazzling us with her talent thanks to her voice that sounds flirty and timidly captivating, to her simple yet very detailed production and her catchy song-writing. Dominique took some of her time to discuss “If I Could Go Back”, her upcoming EP, how new technologies have empowered women and her experience as a producer and song-writer in the music industry.

My name is Dominique and I’m an indie pop singer, songwriter, and producer based in New York City. I’ve been releasing singles for about two years now, and I’m getting ready to release my debut EP before the end of this year.

What can you tell us about “If I Could Go Back”? What were the inspirations?

The idea for the song came to me while I was thinking about my time spent in college, and how the first couple of years I was a bit shy and quiet. I had moved to NYC after living in the same city in Florida my whole life, so it was a huge change and I was often very insecure in public settings. Now that I’m more adjusted, I wish I could go back and relive those moments without feeling afraid. The entire chorus melody kind of just popped into my head all at once–I didn’t really sit down and try to write it. I finished all the production and writing for the song in a couple of days. It all came very naturally.

This is the third single of your EP soon-to⁻be released. What can you tell us about it?

To me, the EP is a series of songs where I give my first real “go” at producing my own music. It was a huge learning experience where I had to push myself to get the sound I wanted instead of rely on other people to craft it for me. Each song has its own distinct sound, subgenre, and writing style, but they’re all tied together through the use of similar production techniques that I’ve developed over the course of making the EP.

Many artists like you who produce their own tracks have said in the past that the music industry, including the press, have dismissed them just because of their gender. What is your experience in the music industry as a female artist and as a producer?

I think I entered the industry when the lack of female producers was becoming a subject that was reported on frequently, so I don’t think my music’s reputation has suffered much due to my gender. There have definitely been times where individual people seemed to not really believe that I was actually making all my own beats, and there have been bits and pieces of conversations and collaborations with others where I felt like my technical knowledge wasn’t being taken seriously. But thankfully some major changes have occurred in the industry, and because of the way technology has progressed, anyone can become a producer irrespective of anyone else’s opinion or permission.

What are the progress being made by the music industry to give more recognition to female producers? What can they do to encourage more women to follow the same path?

I believe that most of the progress is being made by those who are raising awareness to the issue, which includes industry people sharing their stories and the press writing about the lack of women producers and explaining why might that be. I think strong role models play a big part in inspiring young kids to take up a skill, and some girls might be deterred from the technical aspect of music if they take a look at all of the successful engineers and producers and see that most of them are men. But, if they’re made aware that this imbalance isn’t due to inherent, gender-based talent, they can look past and perhaps even be motivated by the imbalance. I think they can encourage more women to follow the same path just by keeping the conversation going and continuing to raise awareness to the issue.

What place do you think technology takes into the expression of female artists?

Now that production software is available to anyone who owns a computer, it certainly is easier for them to express themselves in ways other than writing music and lyrics. And that goes for anyone, really. You can make an entire record in a bedroom, and spend little money doing it. You no longer need to be granted access to work in a studio and learn how to use expensive hardware through mentorship–you can just download software and learn how to use it on Youtube. I think we’re going to see new waves of young, talented, self-sufficient artists constantly changing the sound of popular music, just because now, there isn’t anyone restricting music production and engineering to a certain gender, age group, or status.

What advice can you give to other female artists that are just starting their careers?

Always make honing your craft your top priority. Research how to market yourself and shamelessly ask everyone and anyone you can for advice. Actively listen to as much music as possible. Don’t just upload your slaved-over music to Soundcloud and expect your Facebook friends to make it go viral for you.