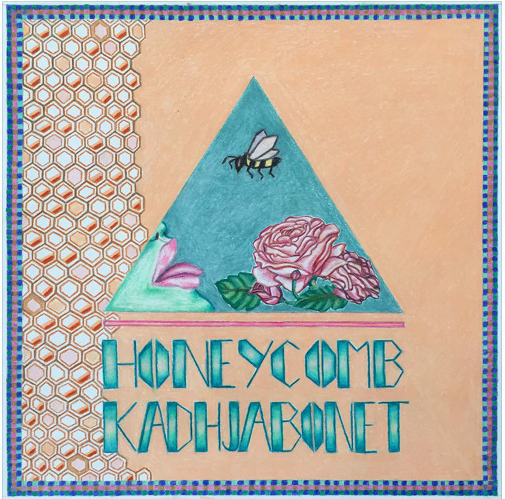 It is known that the bees are nowadays in danger, and as a consequence, they will become rarer. The delicious nectar and the craftsmanship that they carefully deliver in order to create the structure of hexagonal cells of wax known as “honeycomb” could do so. This rarity, precision, and delightful taste are what come first to mind while discovering Kadhja Bonet’s “Honeycomb”. It’s the first track taken from her “The Visitor EP” due to be released on October 21.

“Honeycomb” has the scent of childhood; a nostalgia that turns the track into something familiar and comforting. Indeed, Bonet’s song is a soul track that plays with the codes of soul music’s golden age and that has a certain imperishability. Yet, this is not the typical soulish pastiche that you can hear on the radios or in too many TV talent shows. Beyond the voice, Kadhja (pronounced “Kod-ya”) brings the emotions and the imagery; the details and the precision that enables to distinguish her true talent from a mass of wannabes. The artist achieves to bring us in a secret place, embellished with delicate materials, such as silk and velvet, that you can almost feel caressing your skin. The psychedelia of the track, the mix between oneirism, modernity, and tradition can in a certain way, be considered as reminiscent of David Lynch’ universe.

Even if we don’t really know a lot about her except a small number of releases since 2014, there is no question: Bonet is not a beginner. First, this release demonstrates a developed and rich background, by covering varied styles, from classical to jazz, and including soul, folk, and psychedelia nuances. Further, her EP was written, arranged, and produced by the artist herself. She also recorded a good half of the instruments on her own (guitar, violin, flute) in a DIY configuration while achieving to deliver a masterful rendition. We repeat it again: rarity and craftsmanship.

Read our recent interview with Kadhja Bonet here, and connect with her on Bandcamp.