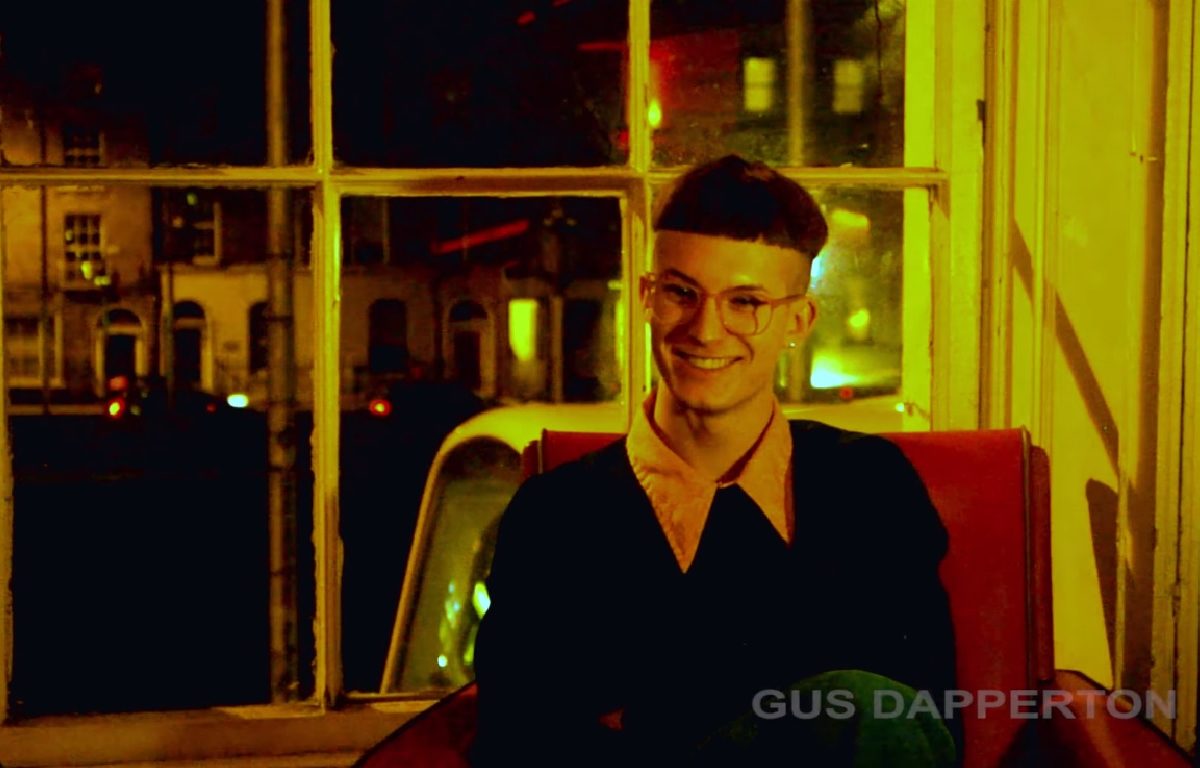 We sat down for an interview with Gus Dapperton before his highly anticipated gig at the Workmans Club in Dublin. The first of many sold-out shows throughout the UK & Europe.

On the “Yellow & Such Tour” he embarked on in January, Gus Dapperton took out his high-school friends for the rhythmic section and his best friend on keys: his 18-year-old sister. All sporting nail polish and bright unisex overalls, they made the young crowd’s outfits look dull. Not to mention I’ve seen more crowd surfing during the show than in any other concert or festival.

Watch Gus Dapperton uncover his idiosyncrasy for us:

Formerly a hip-hop producer as Spazzy McGee, Gus Dapperton won a songwriting contest in eight-grade and learned to embrace his teenage existential crisis, both turning points in his life. The 20-year-old now embodies an authentic version of himself flaunting women’s clothes, makeup, bright colours and his love for older music. Blurring the lines of gender, style and sound Gus Dapperton garnered millions of views and gained support from the likes of Vogue or Pigeons and Planes.

Inspired by the music he got to hear growing up, his songs have a throwback feel that give them a timeless quality – in part helped by the fact that they are sad songs about heartache. Even though he admits he now looks pretty similar to when he was a toddler, Gus Dapperton doesn’t care what people think about his looks: all he is focused on right now is becoming better at his art as a performer, singer, dancer and musician. Everything except production. The first steps to achieve these goals are the 4-month long tour and his second EP “You Think You’re A Comic!” released today.

As always he wrote and produced all the music, still very much influenced by 60’s soft-rock and 80’s new wave. The EP’s single “Prune, You Talk Funny” is a fan-favourite and already has over 2M views on YouTube. However, on “You Think You’re A Comic” Gus exhibits a rawer side of him and a more organic approach to his sound. Indeed, Dapperton uses more live instruments such as acoustic drums and a string section while also daring to strip back his habitually upbeat sound leaving more space to his hypnotic voice like on the closing track “Beyond Amends”. On his second 4-track EP, Gus Dapperton proves he is much more than just another hipster-friendly musician.

Listen to “I Think You’re A Comic!” with the whole family, in a dimly lit bedroom or a car loaded up with friends.

Tags:Dublin, Gus Dapperton, Yellow & Such Tour, You Think You're A Comic EP