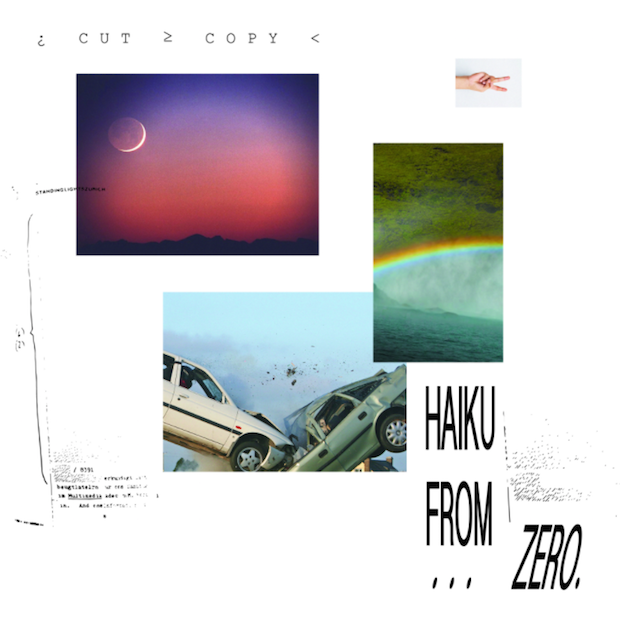 Many of Australia’s biggest bands seem tailor-made for this climate. Like the beer and barbeques, it’s music that’s often intended to accompany sunshine. Having grown up somewhere where barbeques are often rained off and much of the beer is not intended to be served ice cold, it’s certainly noticeable. This is my pet theory as to why groups like Tame Impala, Flume and Cut Copy thrive in Australia. Much of their music is dazed yet upbeat, full of major keys, and generally embodying the philosophy of ‘no worries’. It’s certainly a pleasant break from the unrelenting nihilism found in much of the best music from the UK, whether post-punk or grime. What I’m really saying is that Cut Copy’s music seems ‘Tied To The Weather’, as one of the tracks here so succinctly puts it. It’s certainly likely I’ve managed to cherry-pick a few examples that fit my hypothesis and ignored a bunch of data that doesn’t, but this is a subjective album review, not science. Interestingly, Melbourne has some of Australia’s most consistently inconsistent weather so Cut Copy’s sound should perhaps reflect a little more of the turbulence of their home. These weather contrasts at least explain how Nick Cave could’ve emerged from Melbourne, as well as suggest the cities preference for dingy techno over EDM (something that is reversed in the rest of the country). Anyway, I digress.

While Cut Copy have been of crucial importance to Melbourne’s dance scene, much of their music sounds more like indie for a world where dance music and indie are two sides of the same musical coin. The idea that they were ever separate musical genres with different histories, audiences and traditions is now an alien concept. Most of their tracks are verse/chorus/verse songs that just happen to be underscored by a four-to-the-floor drumbeat and some synthesisers. The traditional hooks of the song are more important than dancefloor tropes like builds or drops.


Cut Copy’s “Haiku From Zero” starts things off with ‘Standing In The Middle Of The Field’, one of the album’s more electronic tracks. The vibe is not unlike Animal Collective circa “Merriweather Post Pavilion” with its blend of African thumb piano and house beats. The joyous insanity of Animal Collective, though, has been removed as if that group had been domesticated, house-trained and bred in captivity. This is typical of the album. While there are a few memorable hooks, there’s little here that’s really exceptional. We get tracks like ‘Black Rainbows’ which plod along as if they are mediocre covers of someone else’s songs. In the chorus of that song, singer Dan Whitford lets loose the least committed “hey” I’ve ever heard in a song.

This essentially is my complaint about this album in miniature: I don’t believe the emotions the group are trying to convey to me. Cut Copy often sound as if they are uninspired by their own work. The vocals often seem to float lightly above the songs without becoming too involved with them. As if Whitford is detached from what he sings. He almost sings like a higher pitched crooner, with that bored Sinatra-esque cool. While this approach might have worked for the Rat Pack and their air of urban disinterest, it’s hardly an approach that works over house-inspired beats.

My favourite dance music is that which grabs you with the intensity of its emotions. As far as the seminal indie dance groups go, Cut Copy have often been the one I’ve most struggled to see the merits in. They have none of the jagged edges of The Rapture, none of James Murphy’s existential record clerk witticisms. It’s a little too polite. Much of it is mere mid-tempo lightweight indie with a disco kick and a synth or two. While I appreciate the sunny outlook of this music, it’s far from my own grey sky thinking. I’m sure I’ll hear one of these songs while drinking a beer in 30-degree heat and briefly feel that I totally misunderstood this album, but I can’t imagine it bothering me too long.