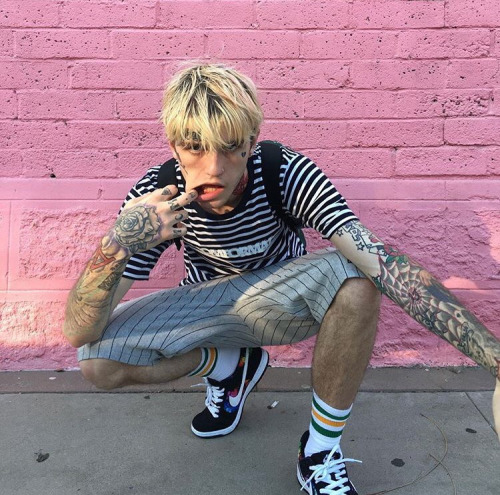 In case you weren’t aware, emo is cool again. New emo bands like The Hotelier have received critical acclaim from hipster music websites, American Football became the great lost band of the last twenty years and Skrillex has rejoined his old emo band From First To Last.

In many ways this is a nostalgia thing. People who grew up with the music and are now adults are looking back on their teenage years. As nostalgia tends to make that which happened roughly 15 years ago cool again, we can maybe finally move on from our worship of the ’90s. Emo can finally come out of its dingy bedroom where it’s been living. Its transgressions forgiven. Its sentimentality no longer making us cringe.

The most interesting part of this shift in perception is not the revival of old styles (it never is), but the creation of new ones. This all started when I fell into a strange, sad internet hole and discovered the YouTube channel/pseudo-label “デーモンAstari“. Much of the music on the channel combines the music of your awkward phase with heavily autotuned sing-rap. Wedded to this musical blend is a decidedly internetty visual aesthetic that relies heavily on sad anime clips with a bit of vaporwave-ish Windows 95 worship thrown in for good measure. The musical style is as removed from My Chemical Romance as they were from Sunny Day Real Estate and they themselves from Rites Of Spring.

“Emo is the soundtrack to youth, and as times change, so does the music that resonates with young people. The history of emo is one of reinvention … of shifting musical styles.” – Andy Greenwald

There is something very now about this music. It’s more than just a breath of fresh air into an old style. This is a postmodern blend of internet mixtapes from Future to Odd Future, for kids who grew up on Adult Swim playing rap tracks before airing anime shows, whose first musical memory was hearing Jimmy Eat World on the radio. As Andy Greenwald wrote in his book “Nothing Feels Good”: “Emo is the soundtrack to youth, and as times change, so does the music that resonates with young people. The history of emo is one of reinvention … of shifting musical styles.”

This music has been a long time coming. “808s and Heartbreak” pretty much set the template (as well as giving a great name to the aesthetic) of autotune assisted sing-rapping over hip-hop beats. That album blends Kanye‘s emotional autotuned singing with the eponymous drum machine of the title while ‘Ye indulges in pettiness after the dissolution of a serious relationship. Since then, rappers like Drake, Future, Young Thug, Lil Yachty, Travi$ Scott and Lil Uzi Vert have followed in this vein while making weird, emotional and melodic music that breaks with many of hip-hop’s established “rules”. Many of these rappers have even been described as “emo” for their soul-baring lyrics.

While these rappers have bent the rules, they still have been successful in the mainstream hip-hop world: their singles topped Billboard’s Hot R&B/Hip-Hop chart, they were interviewed in XXL and a few of them have collaborated with Kanye. There have also been outsiders who have made similar moves and received a different kind of success. Swedish rapper Yung Lean and his Sad Boys crew are hugely influential here with their white-boy autotune imitations of the above rappers. Part of Lean‘s appeal is the production provided by Yung Gud and Yung Sherman who combine the cloud rap of Clams Casino with electronic music touches.

The Canadian DJ/producer DJ Ryan Hemsworth has also been influential with his blend of electronic music, hip-hop and emotional indie rock. Hemsworth has even stated that two of his favourite albums are Waka Flocka Flame‘s “Flockavelli” and Weezer‘s “Pinkerton”, which sounds like the musical path for a good amount of this music. Both Lean and Hemsworth also have a very similar visual aesthetic consisting of Japanophile tendencies paired with a heavily emotional internet-worshipping aesthetic. This aesthetic might be best explained as the move from 90s emo’s obsession with bleeding one’s emotions and questionably poetry into a diary or a zine (“Diary” even being a seminal album in the genre) to publicly blogging these same issues on websites like Tumblr. Sad, suburban teenagers can now live on the internet in which they have created their own distinctive visual grammar.

This new emo-goth-rap hybrid then combines elements of all of these musics. Some songs might sound like full-on emo tracks with hip-hop drums underneath, while some might be a more depressing and distorted version of current mainstream hip-hop. Like any genre or movement there are people who epitomise the movement and people who are hard to categorise, only seeming vaguely related. At the very least, even the artists who maybe don’t quite fit the mould are being included into this sphere by its fans and channels like デーモンAstari. Despite this, they generally share some family resemblances, these are: nostalgic cloud-rap influenced beats, clean guitars (sometimes sampled), short songs, autotune, emo-style singing, rapping and emotional lyrics (often about depression/suicide). These musicians are interested in rap music for its textures and its melodies not for technical rhyme schemes. It is not uncommon, then, to find some weak and fairly unexceptional rapping in lots of this music, but that’s not really the point. The production, however, is often wonderful. It captures the vague sense of emo sadness and nostalgia (the kind you might find in an American Football song) and blends it perfectly with the sad, hazy feeling of cloud rap beats. As with any of the music in a still developing scene, some of the music errs on the side of amateurish production values, but shows promise or is otherwise interesting for its pure novelty.

The music is also not without its issues. Combining the famously dodgy gender politics of emo and rap results in a perfect storm of douchebaggery. In both, women are frequently reduced to “bitches” or corpses. As Jessica Hopper wrote about in “Emo: Where The Girls Aren’t” , “We’re vessels redeemed in the light of boy-love. On a pedestal, on our backs. Muses at best. Cum rags or invisible at worst”. The rapper XXX-TENTACION has become a large figure in this scene despite (or, as Pitchfork suggests, because of) his imprisonment for domestic violence. With mental health issues the scene could be seen to be equally problematic. While in many ways having these artists discuss their sadness and depression can help others feel less alone and less stigmatised, it can also create an area where these issues are fetishised, where they can start to become cool. There are also the very current issue of sad, young men online with only an echo chamber of other equally frustrated young men to talk to. These situations have become the breeding grounds for extremist philosophies like the Alt-right. In terms of racial issues, it would be unwise to think that these largely white performers interest in Japan or African-American music signals any kind of allegiance with Black Lives Matter or other parts of the #woke internet.

The final thing is what to call this nebulous genre/scene that, for now, exists mostly around a few YouTube channels. Emo rap might work, but it’s not all clearly emo and that term has been half-used to refer to rappers like Kid Cudi for years now. Sad rap? IDK. I’m sure someone will soon find a way to categorise this and annoy all the artists who claim they’re totally original and can’t be pigeonholed. I look forward to the day. All I can say is it’s a shame that I won’t be coining said term and irritating everyone myself.

A brief introduction to the artists and songs worth knowing (most of these are best enjoyed with both the music and the video whilst alone at 1am):

– Lil Peep is probably the best and so-far the most well-known. His music is also the most successful synthesis of emo and rap. According to a recent Pitchfork profile his influences are Crystal Castles, Panic At The Disco and Gucci Mane (which says everything really).

“In “Girls”, Peep and collaborator Horsehead appear to be two scene-kids that have snuck into a Chief Keef video. It’s a surreal blend of sleek rap video direction and white kids with face tattoos. It’s also a clear attempt to enter the conventional rap world on its own terms. The beat epitomises the dreamy vibe of much of this scene while the lyrics seem to capture its dodgy gender politics.

“M.O.S” is a gorgeously gothic track that manages to be quiet and loud at the same time. Peep‘s vocals are slurred and low in the mix as if this were a My Bloody Valentine song. It really draws comparisons between shoegaze and this scene with a general emphasis on emotion and texture over clear lyrics.

– XXXTENTACION makes music that is occasionally gothic and distorted, occasionally emotional and sung. The デーモンAstari channel’s most popular upload is “I Don’t Wanna Do This Anymore”, one of his weepier songs, so I’ll include it in this list.

– Nothing, nowhere goes even further into emo than Peep. His music generally combines sad-sack lyrics with clean guitars and emo vocals but throws in some hip-hop production and some whiteboy rapping for good measure.

– Brennan Savage‘s “Look At Me Now” has a great gothic trap beat that Savage mostly sings over, with a tiny bit of rapping.

– Lil Bo Weep‘s “I Wrote This Song For You” was recently championed by Diplo on Twitter. Its genre might be best described as cloud rap ballad.

– yunggoth‘s “idk how to kill myself” is one of the vaguest trap songs ever written. Pretty much the only word you can make out in this ethereal banger is “bitches”.

– OmenXIII‘s “Drop Dead” is basically just a great gothic punk-rap song. He looks the part too, dressed all in black with some black nail polish for good measure.