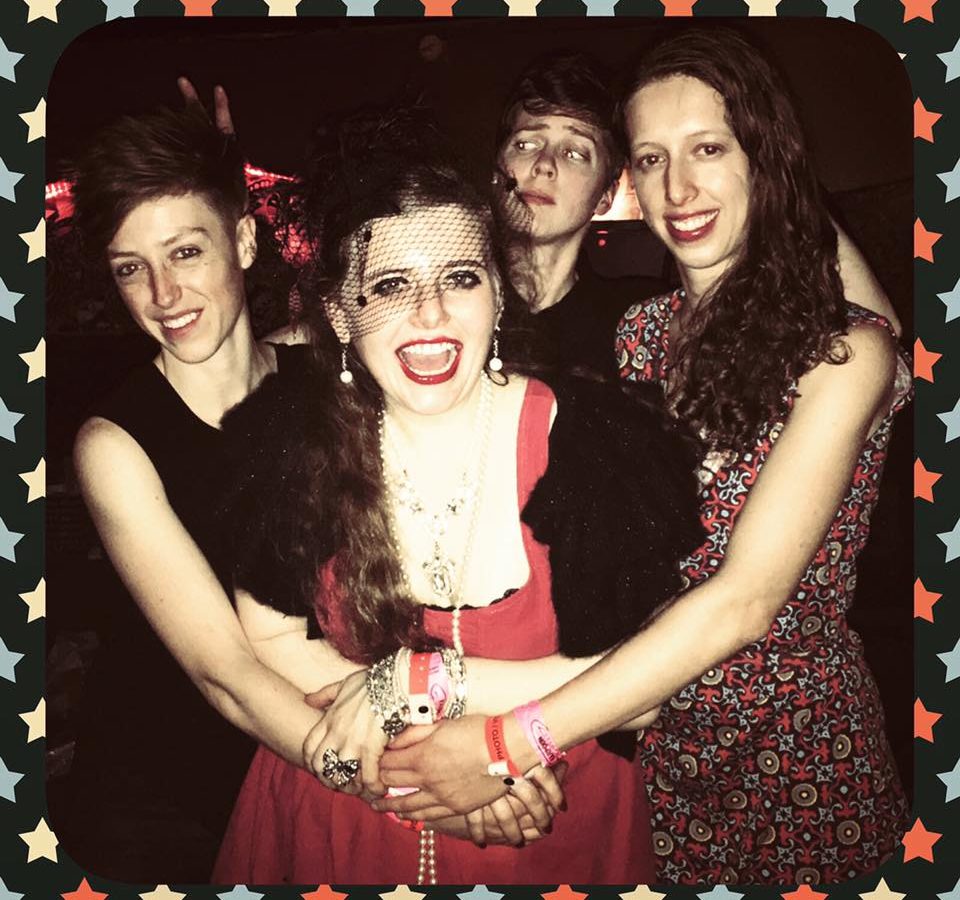 After touring for a while in different prides in the US, queer quartet Unstraight finally satisfied their fans by releasing their debut track “Show Me” addressing the presidential race and not reciprocated love.

It might not be a coincidence that the band decided to share their first song during the beginning of the Trump presidential era. As a way to resist and showcase their queer voice, “Show Me” is an attempt to bring light into women and their place in the queer movement. They took some time to answer some of our questions about their inspirations, the feminist and queer movements and what men can do to help progress.

Highclouds: What can you tell us about your first track “Show Me”?

The lyrics for “Show Me” were written with two seemingly dissimilar thoughts in mind: the pageantry and desperation of the presidential race and unrequited love. In both situations someone is begging/conniving/hoping to be acknowledged. It’s the very first single Unstraight has released out into the world, and we are delighted to have it finally out there to love! It will be included in our upcoming EP, which is in the recording process now.

Katie did the production work with the help of Jess Jacobs. Jess is a very skilled producer and she acted as a trusted advisor to Katie, providing her suggestions on recording techniques. The approach to production was to create a “wall of sound”. The guitar was recorded through several different amplifier tones to create a huge layered sound. The bass was also re-amped through several different amplifier tones and EQ settings. The synthesizer sounds were designed to fit in with the existing instrumental tones. Of course, with several different layers, mixing is a challenge because every instrument must have its own place in the frequency spectrum. The guitar and synth share similar frequency ranges so they often compete for audibility. With the help of our mixing engineer, we used EQ automation and FX throughout various sections of the song to let the guitar and synth take turns in being the predominant instrumental melodic element.

Which groups are your inspirations when you create music?

The songs are co-written by Katie (guitarist/guitar melodies) and Madeleine (singer/vocal melodies and lyrics), and while they share the same vision for Unstraight–it’s uncanny how many times they have the same thought at the same time–they come from different backgrounds. Katie went to Berklee where she studied guitar and synthesizer sound design. She made all of the lovely ambient synth sounds you hear on “Show Me.”

Katie grew up listening to heavy metal and progressive rock (hence the electronic music alias MetalKT). Her progressive metal style is often reflected in her unstraight guitar riffs with lots of distortion and odd time signatures. Her favorite metal band is Tool. Aside from metal, she has wide range of musical tastes, especially classical and indie rock. Her favorite classical composer is Mozart and she enjoys indie rock bands such as Boy & Bear, Fleet Foxes and Florence + the Machine. Many of our songs have a variety of beautiful, clean-tone melodic guitar passages mixed in with heavier rhythmic rock riffs.

Madeleine was classically trained in opera for about ten years before she left that world and helped start a riot grrl punk rock band (The Furiousity, her band prior to Unstraight). She plays the piano and her long-time favorite composer is Chopin. She is also a huge fan of Garbage, Sahara Hotnights, Matson Jones, and the Joy Formidable. With these two varied backgrounds, Katie and Madeleine create songs together that draw from influences across many genres.

Although not the originators of the drum and bass parts in “Show Me” as those can be credited to our former members, Jen and Emily, who have moved to other cities, current drummer Courtney says Mercedes Lander of Kittie is her idol, and Anika Niles is also a huge inspiration. Bassist Emma loves Tina Weymouth of the Talking Heads, James Jamerson, Victor Wooten, and Tal Wilkenfield, and Nik West has inspired and excited her lately. Our synth player, Li, has been digging Passion Pit recently. 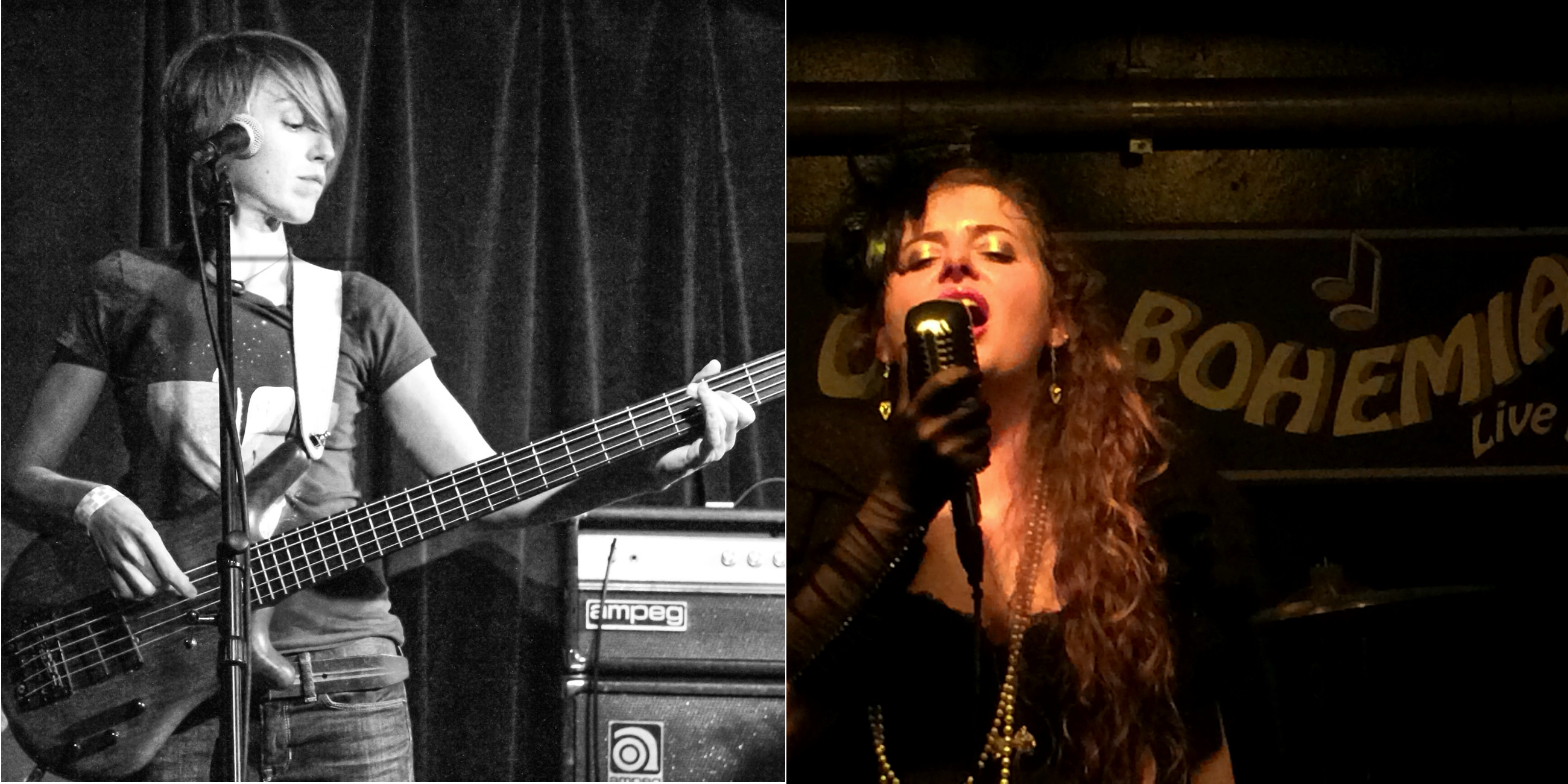 “Men suffer under the patriarchy too” – Unstraight

You have been playing music for a while now. How has your music been received for now?

Just from our live shows and social media we have gained some notoriety in Boston, especially in the queer scene. Madeleine occasionally spends a little of practice time regaling a story of how she met someone new at a party who had already heard of/seen Unstraight! One time it was someone who thought we were too famous (far from reality) to want to play their house show, so they hadn’t asked us. She definitely assured them that we would love to. When the single was released, we were surprised at how many people bought it the first day–and often for more than the $1 asking price! In addition, we often get very positive feedback about our songwriting. One of our fans told us after a show that “your songs have drama without being dramatic”.

Which queer artists do you think are opening doors for LGBTQI representation?

Tegan and Sara, Sleater-Kinney, Ani diFranco, Indigo Girls, and of course Bowie and Joan Jett come to mind. We once opened for Hunter Valentine, and we think they are breaking barriers and opening doors as well. 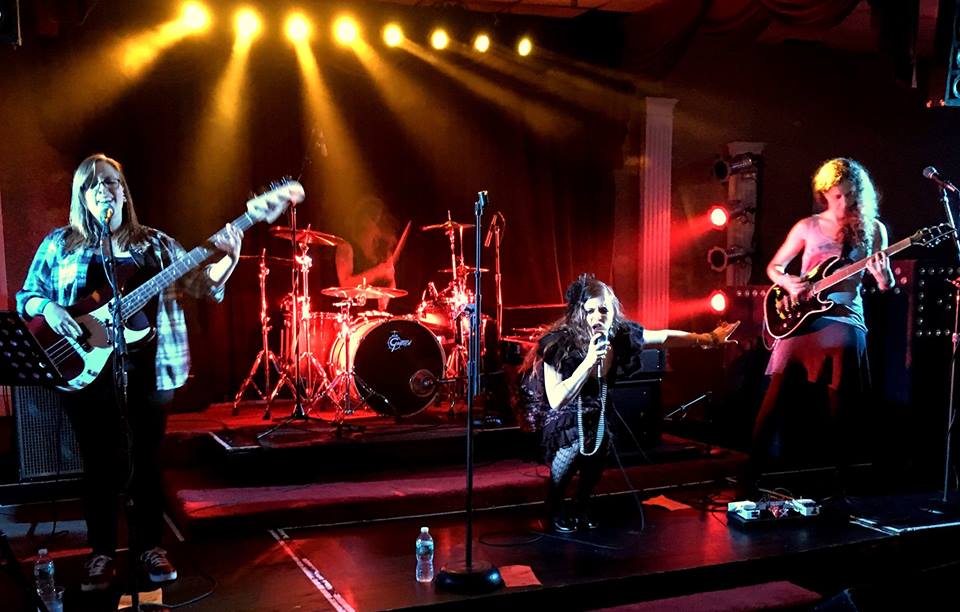 What can you tell us about your BIG QUEER SHOW?

Several years ago, Madeleine wanted to put on a huge show focusing on queers in music. There aren’t very many shows focusing on queers, but if there isn’t a show out there like the one you want, you have to make one yourself! It’s now become an annual Pride tradition, and grows bigger every year. We have always partnered with a local grassroots community group, Mad Femme Pride, who helps bring the sparkle and welcoming friendliness to the show, and now we also feature tables where queer-related community orgs can come and disseminate information. Our next one is scheduled for Saturday, June 3rd, which is the Saturday prior to Boston Pride, at Thunder Road in Somerville, Massachusetts.

What role do you think women play in the queer movement?

Women have always had an enormous role in the LGBTQ movement. Fighting for reproductive justice, trans recognition and health, access to services, and legal equality are just a few of the ways.

How do you think men can relate to the feminist movement and help them achieve equality?

Feminism is for everyone who believes that people should have equal rights and access, no matter their gender; it has been the case historically and is still currently true that women are treated unequally. Men suffer under the patriarchy too–societal expectations of macho, muscled, unemotional manhood abound. It shouldn’t be strange for a man to call himself a feminist, as all he is saying is that he believes in equality for women/all genders. Honestly, feminism is nothing without intersectionality too; recognizing how race or sexual identity, for example, are part of people’s lives and play into oppression is also key.

As for how to help: 1) listen and 2) listen more and 3) show up and 4) speak up. When women tell their stories, don’t doubt or nitpick their reality because it hasn’t happened to you. Listen and support, and show up for rallies and marches. If another man says something degrading about women, instead of brushing it off, say “That’s not cool, and it’s not right.” It’s these tiny, everyday actions that changes minds and hearts and eventually society as a whole.