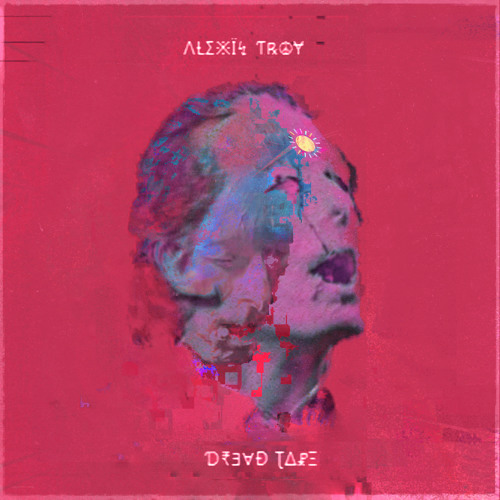 Whether this one is best suited for a pensive night with a drink in-hand, or an extremely pensive night with a tiny square of paper on your tongue, I’ll leave up to you. Regardless, Alexis Troy’s multimedia assault, “Dread Tape”, is not light snacking; it’s a four-course meal for your eyes and ears.

Multimedia “assault” may be a little hyperbolic, but the phrenetic depth of this project’s visual component is not to be understated. A dense, busy, heavily digitalized blend of random movie clips, anime excerpts, and any other 80’s drenched imagery you could imagine doesn’t just set the tone for the music of “Dread Tape”, it completes the vision.

As for that music, what we get here is a truly composite piece of work from the Dusseldorf based producer. Clear notes of Vaporwave and Future-R&B definitely define the sound, but superbly imaginative re-workings of a diverse assortment of a capella – some instantly recognizable, and others markedly obscure – add a whole other dimension of creativity and intrigue to the tape.

Alexis Troy has put out something relatively intriguing, thoroughly trippy, and sporadically ingenious with “Dread Tape”

Take, for example, the very first hip-hop sample used on the tape, from rapper Havoc’s “Uncut Raw”. In the moment that those steel-hard lyrics start cutting through the beat on “500is”, the somewhat stale, purposely outdated vibe of Vaporwave suddenly becomes something remarkably fresh, as a new life gets breathed into a verse that would only otherwise be heard over a familiar boom-bap beat. Same goes for Alexis Troy’s use of vocals from huge artists like The Weeknd on “Venice”, or Madonna on “Dread”; two immensely different, yet equally overworked styles are cleverly fused into one totally unexpected product.

For as successful as these re-workings are, many of the purely instrumental portions of “Dread Tape” make for a lot of down time in the listening experience. What oftentimes comes across as cut-and-dry repetition here can sometimes be excused as the building of melodic themes and motifs throughout the tape’s progression, but there doesn’t seem to be a significant enough overall arc to the project to really make that case. For all the cinematic elements introduced by the visuals, “Dread Tape” really seems to lack a feeling of beginning, middle, and end, as it forsakes dynamic highs and lows for a much more static approach.

All in all, Alexis Troy has put out something relatively intriguing, thoroughly trippy, and sporadically ingenious with “Dread Tape”. While his proclivity for reinventing and re-appropriating existing material was nearly flawless, many of the ‘blanks’ being filled in were done so fairly monochromatically.