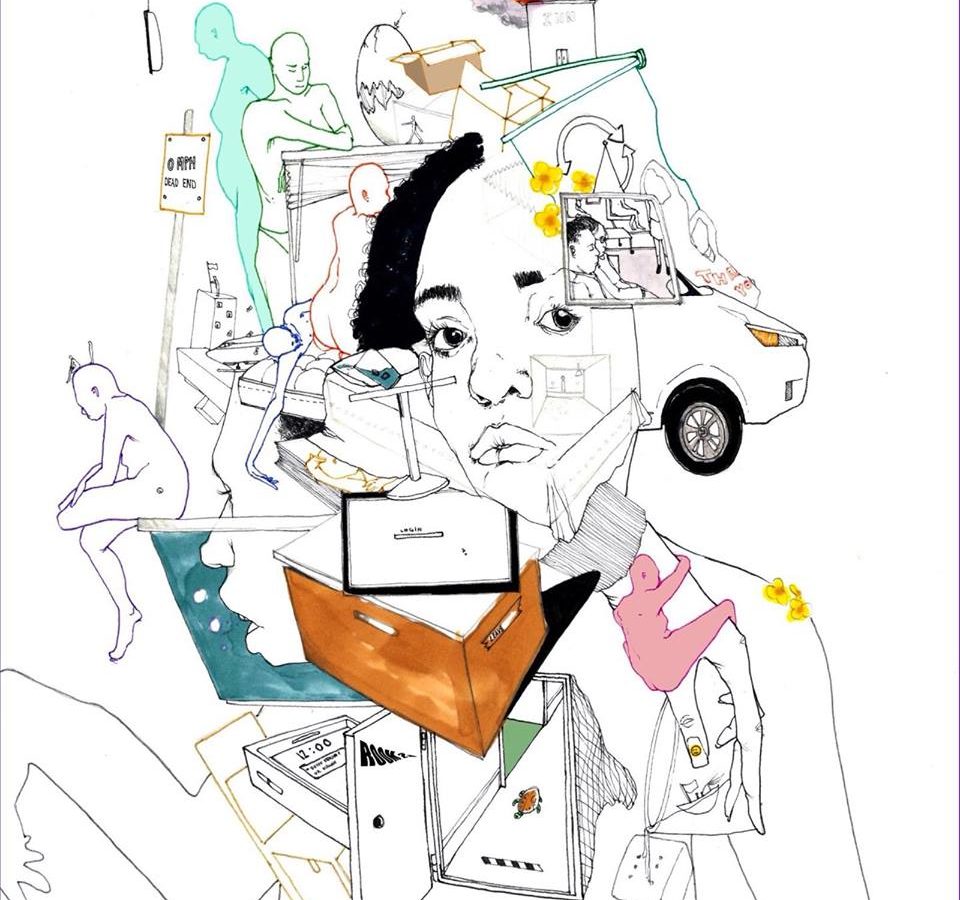 Despite having been a frequent collaborator of Chance the Rapper and Mick Jenkins for the better part of the 2010s, it wasn’t until 2016 that Fatimah Nyeema Warner aka Noname became a rap sensation. That year saw the release of her first mixtape “Telefone” to critical acclaim. Relying on jazz as the musical’s backbone on which to support her rapping and letting her songs brim with unusual savoir faire, Noname filled a void in today’s male-dominated and electronics-heavy rap music. It was always clear that if she was going to make it, it was going to happen in her own terms. Now, she’s releasing her first proper album, the self-produced and self-funded “Room 25”.

Unlike recent rap albums, “Room 25” is relatively short of collaborations. While half of the tracks do have featuring artists in them, their contributions never take the spotlight away from Noname. It’s also a rare rap album in that it hardly follows any of the genre’s conventions (“I know n****s only talk about money and good pussy”, she raps with tongue firmly planted in cheek at the end of “Self”). It’s straightforward and brief for what might be regarded as a conscious rap album, the sum of the lengths of its eleven tracks barely surpassing the thirty-minute mark. For the most part, “Room 25” does away with sampling and studio-born tricks, instead embracing an old-school feel that fits perfectly with Noname’s flow. In terms of production, “Room 25” is simply perfect; a lively album with an instrumentation so palpable that listening to it feels just like being in front of Noname and her band in a tiny jazz bar.

Jazzy and groovy, “Room 25” is as much of a musical step forward for rap music as it is a look backwards. The ongoing interplay between the bass and the drums serves as the cornerstone for pretty much every song here, giving off nostalgic airs in its nods to early 90s rap music. But Noname is no doubt a 2018 rapper. Her fast and spirited vocal delivery resonates with current trends, and the commending width of her register aids her in attenuating drastic genre shifts. Though diverse in its sonic palette, she flows seamlessly even without recurring to the rap music’s headlining trick: the skit.

It’s an album that can be simultaneously revered by a younger demographic used to the R&B-tinged sounds of “Regal” and “Part of Me” and by old-school rap purists, who will find joy in the playful basslines and drum patterns of songs like “Blaxploitation”. Arguably the best song on the album, the latter finds Noname at the top of her game as a lyricist, dropping verses that basically put any other current rapper to shame: “I’m struggling to simmer down, maybe I’m an insomni-black / Bad sleep triggered by bad government / Write a think piece in the rap song, the new age covenant.” “Blaxploitation” is as politically powerful as it is catchy, a relentless, take-no-prisoners two-minute banger that plays on notions of racial identity and white hypocrisy. Relying on its Adam Ness-sung chorus hook, “Prayer Song” is a thrilling take on police violence as poignant and effective as any song in Kendrick Lamar’s “To Pimp A Butterfly”. Boasting impressive lyrical skills as indebted to Missy Elliott as they are to Maya Angelou and Toni Morrison, Noname is simply one of the most thrilling lyricists of our age.

“Room 25” is as broad in sounds as it is in lyrical themes. The album starts off with Noname showing off, as a good chunk of rap records do. Even before you’ve heard more than thirty seconds of it, she begins by letting you know that “Room 25” is going to be that kind of album; that it’s going to infiltrate your consciousness and shake you up: “Maybe this the album you listen to in your car / When you driving home late at night / Really questioning every god, religion, Kanye.” And that’s only how it begins. By the end of the song, she goes to display some God-tier female braggadocio skills: “Fucked your rapper homie, now his ass is making better music / My pussy teachin’ ninth-grade English /My pussy wrote a thesis on colonialism.”

By the end of the album, though, the show-off façade collapses and we’re sent home after being finally offered an honest window into Warner’s life. The closing track “no name” functions as a sort of inverse fourth-wall break; the mask separating artist and person disappears as Fatimah Nyeema Warner takes Noname’s place for the album’s conclusion and comes up with a commanding political rationale behind her artistic moniker. “No name for people to call small or colonize optimism / No name for inmate registries that they put me in prison / When labels ask me to sign, say my name don’t exist, so many names don’t exist.” It’s hard not to be instantly reminded of Emily Dickinson’s famous poem: “I’m Nobody! Who are you? / Are you – Nobody – too?” “no name” is probably the most contemporary song on “Room 25”, its second half channelling Frank Ocean’s more wistful side. It’s an odd last track in that it closes the album by taking it in a wholly different direction, but it makes the album’s narrative come full circle. “Room 25” works as a portrait of Noname, and it’s not fully completed until its last notes gradually vanish in a lovely fade-out.

Equally hook-laden and intricate, “Room 25” can be enjoyed on many levels. From its sensual instrumentation to Noname’s splendid lyricism, there is something here for every kind of music lover. If there is something missing from “Room 25”, that’s a true hit that stands out from the other songs. Not that it needs one, though. Noname’s first album is simply one of the best debuts in recent history.