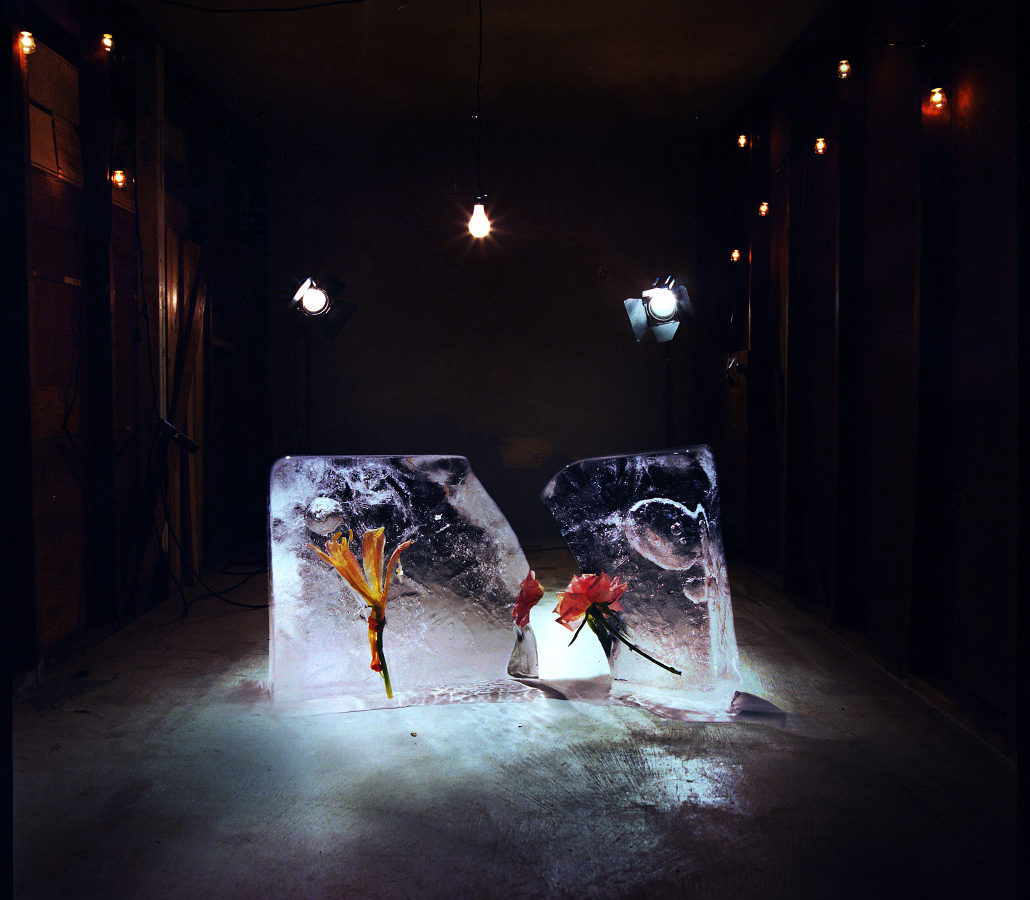 There’s a certain degree of bullshit to the old adage, “don’t judge a book by its cover”. Love at first sight – whether with a person, a book, or an album – can only exist when outward appearance matches inward substance, and that’s just one overly-poetic example. Alternatively, take Shy Girls’ first studio album, “Salt”, which possesses the same faint beauty as two flowers suspended in ice on a concrete floor, under the dim glow of the lights above.

In an eloquent Tumblr post, Shy Girls (AKA producer/singer-songwriter Dan Vidmar) laid out some of the meaning behind the album and cover art, describing the “thousands of tiny deaths” he’s experienced in his life, and explaining how salt plays a role in dealing with this, whether it is rubbed purposefully on wounds or placed atop metaphorical ice, left to erode it as time erodes us all. Again, a bit on the poetic side.

However lofty as it may be, the emotional musing of Dan’s sentiments transfers beautifully over to the music of “Salt”, beginning with the powerful one-two punch of “Intro” and “You Like The Pain Too”. Intro, gushing with glassy pianos and woozy falsetto vocals, isn’t much other than, well, an introduction; but, it still manages to demonstrate a near-superhuman sense of texture and space within a song. “You Like the Pain Too”, on the other hand, is a blatantly killer piece of the kind of aching, pure songwriting that will make the hair on your neck stand up every time you hear the chorus. And that build-up of feedback before the second echoing of “You like the pain too, and it hurts I see you burn” … goddamn what a moment.

There’s a good amount of diversity within the cohesive sound that Shy Girls carves out here. We get everything from alt-rock guitar riffs reminiscent of Arctic Monkeys on “Watercolor Dreams”, to 1980’s prom vibes on tracks like “Trivial Motion” and “Why I Love”, and, of course, dreamily melancholic R&B vibes layered beautifully throughout the entire project. There’s a lot to love about “Salt”: skilful instrumentation, crisp production, heartfelt lyrics, gorgeous atmospheres, gossamer vocals and, above all, the synthesis of all these things into a ten-track journey that’s all but guaranteed to make you feel something at some point. While not every moment is exciting – there are definitely some passages that might have you daydreaming – I’m hard-pressed to find anything that lacks ingenuity and individuality within these tracks.

Shy Girls previous releases – 2013’s “Timeshare EP” and 2015’s”4WZ mixtape” – had a lot of the same electronic-influenced flairs and strengths as Salt does. But, the level of maturity and restraint reached on this latest iteration make for a powerful first album, and a tranquil way to spend a half-hour. If the striking album art and my convincing have both failed to get you ready to press play on “Salt”, heed the Tumblr post, and remember you’re just a block of ice who’s quickly evaporating… so, what’s another thirty minutes, really?