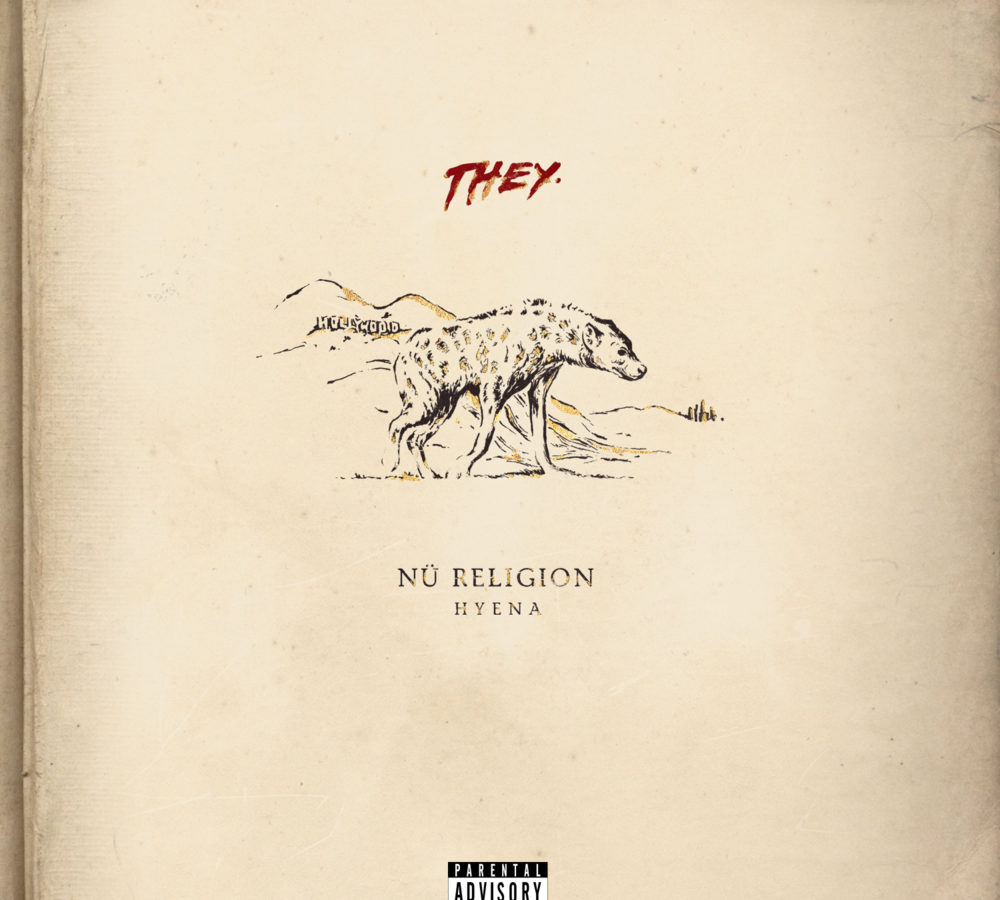 Hyenas are cunning creatures – the Machiavelli’s of the animal kingdom. THEY.’s alignment of their own aesthetic with that of the hyena bears mentioning, considering that the self-drawn comparison feels somehow accurate considering the shadowy mystique of their debut album, “Nü Religion: HYENA”.

THEY., an L.A.-based “Grunge&B” duo consisting of producer Dante and producer-vocalist Drew, made a loud entrance in 2015 with their three-track “Nü Religion” EP. It was immediately evident that these guys had a voice and chemistry of their own, with subsequent singles like “Deep End” and “Rather Die” managing to both affirm and call into question the accompanying potential with their inconsistent quality. Considering that “Nü Religion: HYENA” is the culmination of all their work thus far, it’s hard to tell whether or not that potential has been realized.

The album does start out strong, with Dante’s sharp drum patterns and Drew’s melancholy melodies immediately shining through. It’s not long until we’re back in familiar territory, with mid-2016’s “Deep End” and “Motley Crew” off of the debut EP coming up back to back – two fantastically progressive and yet contrasting R&B tracks that truly show off THEY.’s range and ability.

THEY. spends the length of their debut LP “Nü Religion: HYENA” rehashing old ideas, failing to breathe new life into them.

However, while THEY. spent the beginning of their rising popularity breaking today’s hip-hop/R&B mold, the duo spends the length of their debut LP “Nü Religion: HYENA” rehashing old ideas, failing to breathe new life into them. Maybe a harsh statement, so let me explain. This album has some exceptional highlights – but only one of those standout songs, “Silence”, is even remotely indicative of what THEY. is up to now. Otherwise, the most intriguing moments on the whole album are just the entirety of the “Nü Religion” EP making an unedited encore appearance, save for the 7-month-old “Deep End”. The heart wrenching, vocoded singing on “Back It Up” and the sense of shamelessly not giving a fuck that underlies “Bad Habits” make for some really amazing, memorable songs – and yet it doesn’t feel right to judge this project based on that merit.

Yes, it could be said that THEY. have every right to expose their old hits to a new audience by including them on this much more visible release – and they do. The real problem is that the material here that is brand new – or even relatively new – feels like a poor attempt at turning their previous non-formulaic triumphs into a formula. “Truth Be Told”, for example, flaunts drum programming that is nearly indistinguishable from that of “Motley Crew”, and yet lacks all of the spark and freshness. Tracks like “Africa” and “Back Around” are similar offenders, with the added misfortune of creating the impression that Drew’s cache of vocal ideas may be scarcer than it first seemed.

And so, when it comes to passing a final judgment on “Nü Religion: HYENA”, there are two ways to look at it. In a vacuum, this album is solid, possessing no shortage of throwaways, but with high points that really carry a wow-factor. However, examining the LP as a first major step for artists who showed immense promise early on, it’s a disappointment, full of creative stuttering and tons of steps sideways and backwards. All things considered – the wild highs, the off-putting lows, and every single moment of stagnation in between – “Nü Religion: HYENA” just does not feel like the album it could have, or should have, been.