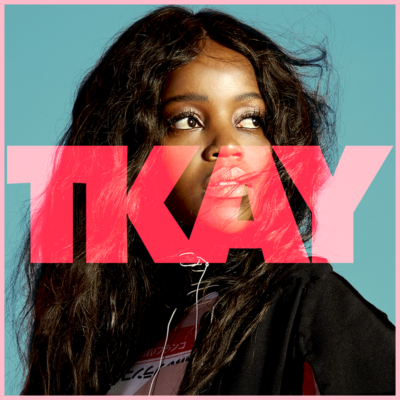 Much-hyped (in Australia at least) “Tkay” is the debut album of Australian/Zimbabwean rapper/singer Tkay Maidza.

It’s roughly evenly split between dance-rap songs and more R&B tinged electronic pop songs. Her rapping style and choice of beats certainly point to influences from dance-rap OG Azealia Banks as well as the colorful sonic palette of M.I.A. Unfortunately, unlike those rappers, she lacks the sense of that incredibly forceful personality that almost seems to bleed off the tracks.

While Tkay Maidza is a technically gifted rapper, her lyrics and flows on her album “Tkay” are almost entirely forgettable.

Despite having listened to the songs many times, almost no lyrics have managed to stay in my head. To paraphrase Roger Meyers, Jr., she’s got no attitude, she’s barely outrageous and I don’t know whose face she’s in but it’s not mine. Pretty much the most important thing a rapper can have is their personality, whether they’re obnoxious, lewd or lyrical, you should get some impression of their character. Tkay Maidza leaves very little resonance in this respect. It almost seems like she’s holding back on her raps and that with a better vocal producer she might be able to come through little more forcefully. This isn’t some axe-to-grind I have against pop-rappers though. A rapper of this ilk can be ridiculous and even stupid but being forgettable is a terrible sin. Listen to rappers like Rae Sremmurd and you will hear charisma in their rhymes, even if it’s only about money and sex.

The most effective tracks on this album are still, however, the rap songs. The one-two punch of “Tennies” and “Monochrome” is easily the album’s strongest point. These are both up-tempo dancefloor-ready rap songs that show Maidza at her best. When her raps are dancing so skilfully over the beat at this tempo, you almost don’t notice that she’s talking a lot without saying anything. “Tennies” is propelled by a brilliantly muted 808 kick that would sound fantastic on a packed dancefloor with big enough subwoofers.

The album’s final track, “At Least I Know”, is an interesting change of tack that suggests a slightly more unique position for the album. It combines an almost PC Music-ish vocal cut-up with dreamy verses that could’ve come from Grimes‘ “Art Angels“.

Tkay Maidza doesn’t have a great ear for a hook so the pop songs generally leave fairly little impression. The strongest of these tracks is either “House Of Cards” or “Castle In The Sky”. The latter’s strength comes mostly from its Flume-like chorus synth which is vaguely reminiscent of his remix of Lorde‘s “Tennis Court”. “House Of Cards” could almost be one the future-garage R&B crossover tracks from SBTRKT‘s eponymous debut. Unfortunately, tracks like “Follow Me” are wholly forgettable and make up the majority of the rest of the album. What is important for most of these songs are the uniformly strong beats which generally combine elements of currently trendy producers like the aforementioned Flume or Diplo. These well-produced beats are often the best hooks in the songs.

Saying all of this, I feel that hip-hop is an insanely difficult avenue to get into for a female artist. It seems that many promising female rappers seem to be goaded into following-up exciting underground releases with mediocre pop material (Angel Haze being a great example). Other rappers like Tink seem to be far less popular than they rightly should be with the talent they have. And if you do succeed to become a successful rapper, like Nicki Minaj, people will consistently overlook your talent in favor of your looks. Tkay Maidza feels like she is on the first step to making some interesting music but whether she will fulfill this promise is anyone’s guess.