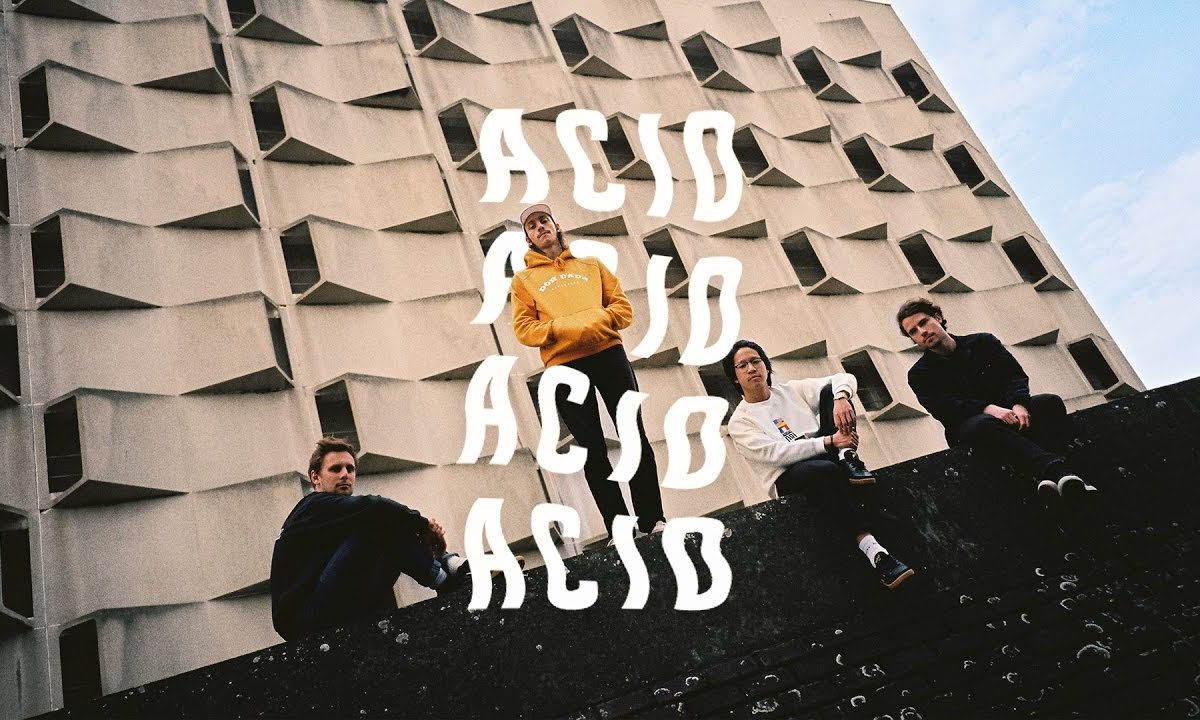 Benoit Do Quang’s (aka A$ian Rocky – ULYSSE’s multi-instrumentist and creative mastermind) directed video is a little gem portraying Belgium as a magical place. “ACID” recalls the hallucinogenic drug that alters perception of the outside world. It is known for its ability to give you the chemical keys to the gates of heaven and that’s exactly what is happening in the video as the Harelbeke church arises like the 8th wonder of the world paving the way up to the alluring purple sky. Not to mention the imposing Art Deco architecture of the Antwerpen “Museum aan de Stroom” (which means “Museum by the River”) adding beauty to the cinematographic hallucination while our senses are enraptured by the music and confused, by the very fast paced and suddenly extremely slow-mo shots.

The powerful cut sees ULYSSE successfully marry their indie, electro-pop sensibilities with Roméo Elvis’s rock and hip-hop influences. Its sound hits all the right marks, sitting somewhere between a catchy electro-pop tune and an unconventional-soundtrack to living in a fool’s paradise where Arnaud Duynstee‘s raspy vocals take us back to the better days of playgrounds and romances. Adding to the surrealism, only in Belgium, you can hear a French speaking band singing in English with a francophone rapper on the same track. “ACID” is the kind of collaborative effort further anchoring Belgium on the map.

ULYSSE and Roméo Elvis had too much in common not to team up. It was meant to be.

Who better than the outstanding Roméo Elvis to lay his deep, throaty flow on the track? If you are familiar with the 24-year old phenomenon you probably know about his inclination towards drug induced trips and his use of symbols and surrealism like when he calls to “fuck life to avoid its hardship”. Even if he’s already spat bars in English like in his latest (and excellent) project “Morale 2”, Roméo sticks to what he does best while ULYSSE sound better than ever with chic production & inimitable instrumentation wrapped up by a looping guitar melody reminiscent of the culmination of a psychedelic trip.

This year has already been a huge one for new music but this collaboration is simply perfect in all aspects. Long hair and over-sized clothes, super-creative ex-bedroom producers from Brussels, into surrealism and influenced by rock and electronic music; ULYSSE and Roméo Elvis had too much in common not to team up. It was meant to be.

The trio have undoubtedly tacked on loads of new influences but keep the essence of what has made us love them in the first place, their perpetual merge of genres and sounds, always upholding the versatile Belgian label. In his spotless verse, Roméo Elvis accurately portrays the blooming cooperative and creative climate in Brussels “I am lucky enough to have friends as colleagues” as Benoit Do-Quang directed some of his videos and ULYSSE united with another talented artist from the aforementioned city for the single’s fitting artwork.

Loads of exciting dates coming up for the band starting on May 20th as they open for another Belgian electronic band we love, Warhola, at the Ancienne Belgique followed by Les Ardentes on July 7th (on the same day as…Roméo Elvis!), Les Francofolies de Spa on July 22nd and at the Botanique on the 28th of September, their first headline show in Brussels where their long awaited third EP will be presented.