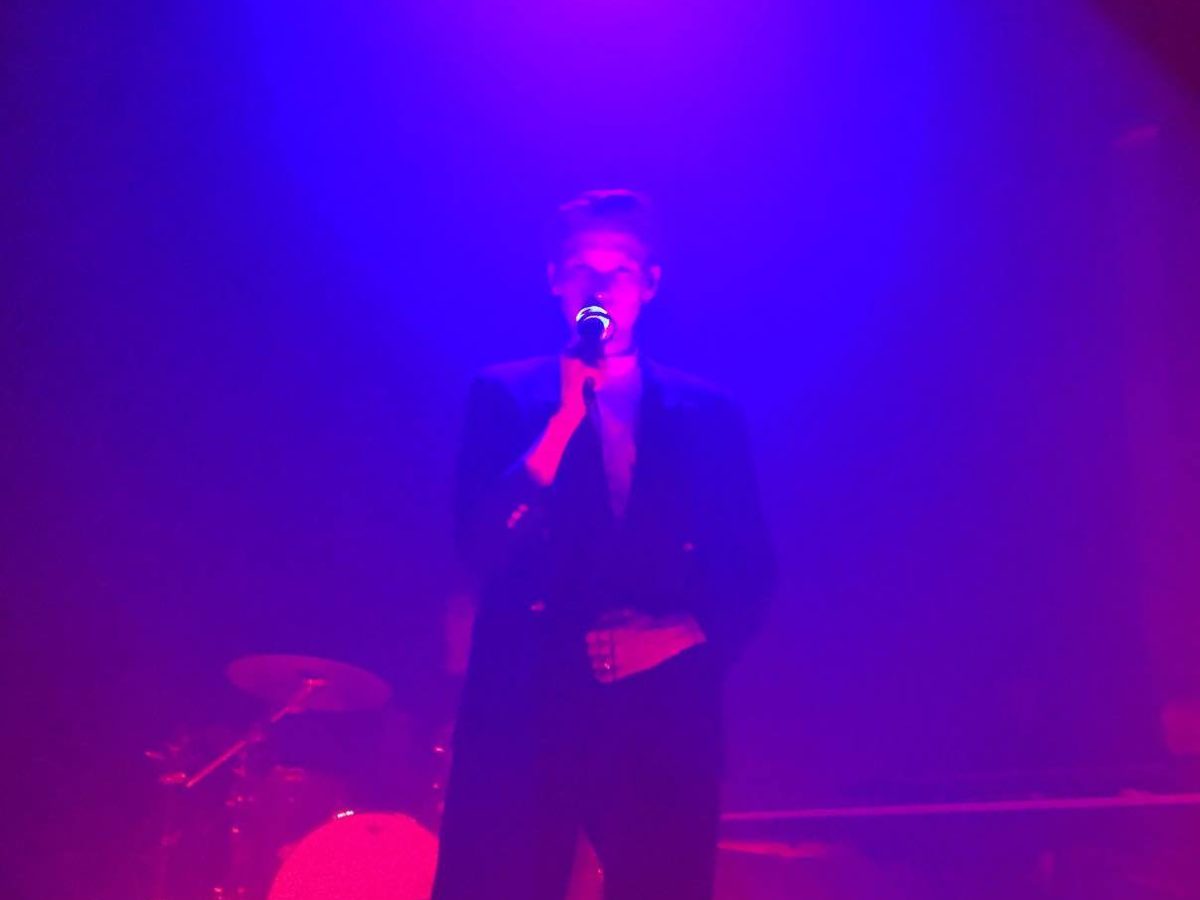 Our fifth day at #Nuits17 in Botanique continues with Thomas Azier and the duo Rive.

In this uncommon sultry climate, I was unusually late for a gig (which I blame my dentist for). A great start to my first ever gig with a press pass, a special feeling for the young concert enthusiast I am, but, no time to celebrate; I had to rush to the Orangerie not to miss any extra second.

Even though I was unpunctual, I easily got to the front as many people were still outside having food and drinks. Right in front of my eyes was the Brussels-based duo in vogue, RIVE. Composed of vocalist, pianist and guitarist Juliette and Kevin, the drummer and synth guru, the pair have received a lot of praise from the Belgian media and especially us at HighClouds as we loved their first EP “Vermillion“. After almost 10 years of musical collaboration and two rock projects in English, Juliette and Kevin took a fresh new start in late 2015 as they felt the time was to write and perform in French which successfully resulted in several prizes during francophone musical contests last year.

I missed the opening song “Narcose”, therefore, I looked around to grasp the general ambience and noticed attentive expressions hanging on to every word that came out of Juliette’s mouth. Later, the duo told me saddened “Oh… too bad, it’s our favourite song to play but come again next time!”, I promised I will… With the second song “Justice”, her silky and intimate voice filled up the room with magic. She instantly put me under a spell and I wasn’t the only one…when suddenly, Kevin’s powerful synths and drums thundered while he juggled between the two instruments in his jerky, almost possessed gesticulation. 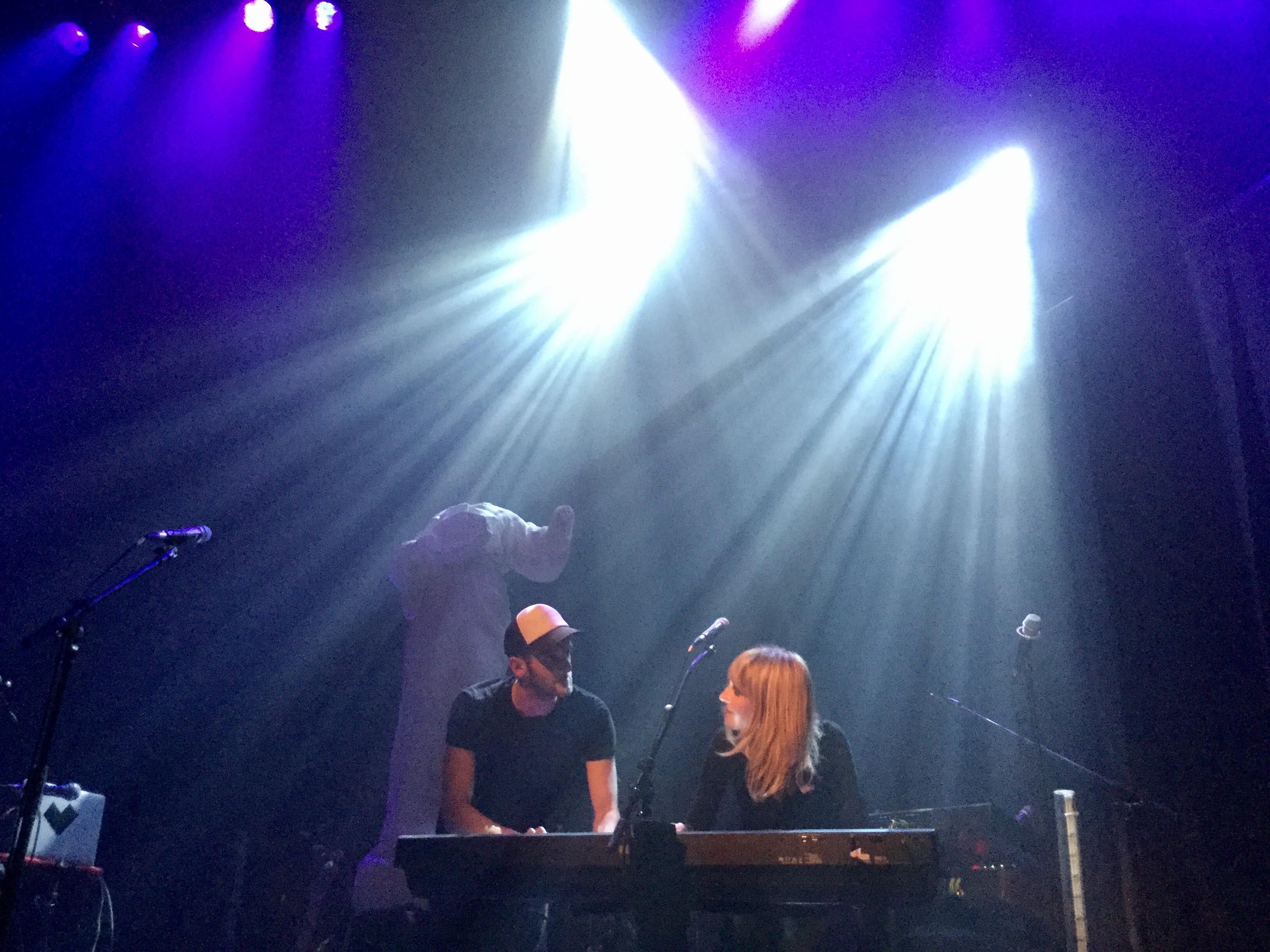 “It’s up to your own interpretation” says to us singer from duo Rive during their live at #Nuits17.

The music is delicate and powerful at the same time. The latter sparked by Kevin and the former by Juliette. This duality is something we find in their artwork and in their 3rd group member: a headless statue. After asking them what it represents post-show, it remains quite a mystery but once again, there is duality. The woman’s body could represent sensuality and vulnerability while her chopped off head unchains her from all the clichés surrounding women, an empowering feeling. “It’s up to your own interpretation” says Juliette keeping the myth alive and just like in RIVE’s music, conjuring certain imagery outreaching into totally new perceptions.

Their, ironically, double headed music seeps heavily in emotions: love, fantasy but also absence. The next songs are more aerial as Juliette’s dreamlike and poetic narrative merges swimmingly with Kévin’s luscious and, at times, nonconformist instrumentation. The tracks aren’t crowd-friendly but are still memorable particularly if you listen to the lyrics: I can still hear Juliette’s voice whispering all my problems away by confessing her love and doubts.

And then, “Vogue” kicked in. One can immediately understand why it has more than 130k views and why, by Juliette’s own words, it’s the track that enabled the two best friends to get to where they are today. A few smiling and dancing individuals originated carried by the addicting, reverb loaded guitar melody and Kevin’s upbeat, sharp percussions later reaching a cosmic climax where the duo’s chemistry peaked with regular eye contacts, smiles and passionate playing.

Literally translating as “river bank”, RIVE’s dream pop overflows with rich textures and metaphorical lyrics taking your soul to different latitudes. The delicate closing track “Nuit” highlights the duo’s state of mind asking us to “break the walls”. This is exactly what RIVE are doing at #Nuits17 and new career, breaking the previously avoided French pop, embracing the language’s nuance and beauty with inimitable songwriting and surprising arrangements. The end of their set witnesses the duo allowing themselves to close the performance very intimately behind the same piano, something I had never seen before and am looking forward to see them again soon.

Involuntarily or by choice, tonight’s leitmotiv is the primary colour RED. Both acts have a peculiar relationship with it as the titles of their recent projects alludes to the primary colour. Thomas Azier, one that I’m not afraid to call a genius, titled his sophomore album, “ROUGE”, for its different meanings and contrasts. The colour of passion, sensuality, violence, hate and love has different significances and nuances just like his voice provokes different emotions.

The room is filling up; everything is set to welcome Azier on the opening night of his “ROUGE tour”. On stage, a drum kit, a bass, a guitar and three different keyboards: a clear indicator of Azier’s new direction that contrasts with the digital synths and pads of his previous sets for his electronic first LP “HYLAS” released in 2014. A noticeable change during his concert now that he lives in Paris making both a lifestyle and a musical change. A confident fast paced entrance, a cheeky tongue stick and the show was on. We could instantaneously sense the French “joie de vivre” inhabiting him in his smile and positive energy.

On the opening track “Starling”, his intentions are clear: immediate eye contact with the audience, the man claps and dances on the upbeat percussion loop asking his darling to dance since it’s “too late to worry now”. The follow ups are the second album’s singles: “Talk to Me”, “Winners” and the infectious ode to “Berlin”. With those three tracks, Thomas shows what he’s vocally capable of and what his new album is all about: insightful song writing, no vocal effects and a smart, pop sound: chart-friendly but full of creative energy. “Talk to Me”’s subtle drum beat makes everyone move along to his dance moves, like the ones in his music video on the track’s perfect synth melody. His honest and passionate vocals touch and make us question our communication with our loved ones while on “Winners” everyone claps and sings along “trying to be winners” as the song rises crescendo to reach highs.

“CA VA BRUXELLES?” “They told me I didn’t sell a lot of tickets but here you are! That’s what matters to me!” claims Thomas as the crowd cheers louder turned on by his big smile and body language. Naturally, he played a few of his older tracks such as “Hylas”, “Red Eyes” and “Angelene” (which appeared to be the song the crowd could most confidently sing along to): all three are fan’s favourites with epic vocal performances and gripping, but more discrete electronic elements than before except on “Yeux Rouges” (Red Eyes) where a huge wall of electronic sound and synths climaxes with an epileptic light show.

The real gem, however, is “Sandglass” a song about “living in the moment” says Thomas thanking us, once again, to be here with him tonight. Perfectly reflecting the young man’s attitude, this song proves his is not living in the past but lives the present instant. Turning his back to the crowd, he tapped delicately his piano keys using his higher vocal range to move the crowd making quite an impression as the song garnered loud clapping.

At #Nuits17, Azier‘s electronic ingredients work very well but the fans also seem to love the great songwriter and performer he is.

When “Crucify” came on, it was like seeing the younger Thomas Azier revive from its ashes, an intense track, one of the few with electronic effects. his electronic ingredients work very well but the fans also seem to love the great songwriter and performer he is. The polyvalent singer audaciously brought out “Call” a beautiful ballad “he loves to play live” (we did not doubt it a second) in which he howls for someone’s call before finally presenting the band and ending the song by sitting down but standing up as quickly as he got to down. Thomas spices things up by announcing he performs a song for the first time: a cover of “A Forest” by The Cure. The driving bass and frenetic drums all formed around Azier’s flawless singing and showmanship, jumping everywhere with slightly confused fans as most of them probably thought it was his own song. A few years ago, Thomas Azier joined Paris-based band The Shoes at L’Olympia for a cover of “A Forest” as well, so I guessed he continues to play that cover. The band also made an excellent remix of “Angelene” and they collaborated together for a song called “Two Pills” for the soundtrack of “Iris”. Somehow, all of this is related, and we’ll know the answer one day. Smiles reappeared when “the last song” “Gold” came on, the catchiest and dance-friendly song on his latest album (which he performed in its entirety!).

Chest banging, finger pointing at the crowd, holding his mic tight, always interacting with his band members and fans, Thomas Azier didn’t leave a single area of the stage untouched. His devotion to his art shines through and we could see that he was delighted to be back on stage after two years in the studio. The encore track “Babylon” closed the show beautifully, Thomas even got a red rose from a fan which got him to say he will hopefully be back in December because “[He] I love[s] Brussels so much”. We love you too Thomas.