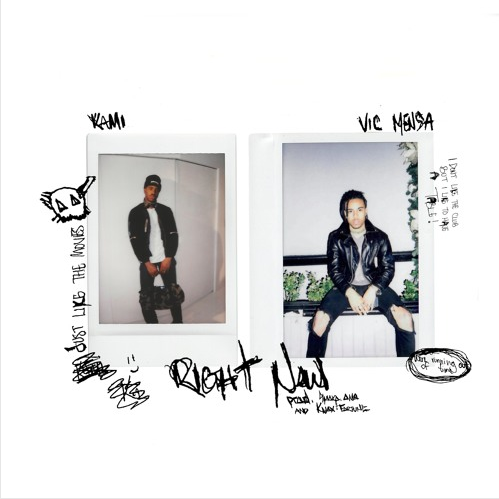 Chicago’s SAVEMONEY collective has been responsible for some of the best and most innovative hip-hop of the past several years, with member KAMI’s latest track “Right Now” being no exception to that rule.

The song is a SAVEMONEY creation through and through, featuring one of Vic Mensa’s best performances of the year, as well as production from Smoko Ono and Knox Fortune that’s almost too hot to handle.

It takes approximately two seconds before Kami and Vic Mensa‘s “Right Now” gets you nodding along.

The beat is as driving and infectious as it is melodic and shiny, with tight drums, dirty synth bass, and a sweet, airy swell that underlies the track and becomes the subtle highlight here. Groove firmly established, KAMI waits a whole two and a half minutes to hop on his own song, leaving plenty of room for Vic Mensa to show off his A-Game. Vic’s hook is catchy, and his verse mixes the off-kilter flows and killer punchlines of INNANETAPE with the introspection and depth of There’s A Lot Going On, meaning that we get lines like “Fucking hoes with my girl at stake on some Joan of Arc shit”, while also receiving some fairly profound food for thought.

This isn’t to say that Kami gets outshined, however; in fact, he more than holds his own against Mensa. With emotion dripping from every word, and an urgent, almost anguished delivery that mixes melodic rapping with sudden bursts of auto-tuned singing, KAMI manages to solidify “Right Now” as a real anthem of resilience and survival. Despondent pleas like “Self-medicated, overdosing I need respiration” and optimistic resolutions such as “We still alive, we stay alive and then repeat that process. There’s no such thing, there’s no such thing as running out of options” sit side by side, making KAMI’s own inner-conflict a tangible piece of the music.

“Right Now” would be a good time to free up 4 minutes and 37 seconds, give this song a listen, and see why it’s a last-minute contender to be one of 2016’s hottest hip-hop tracks.