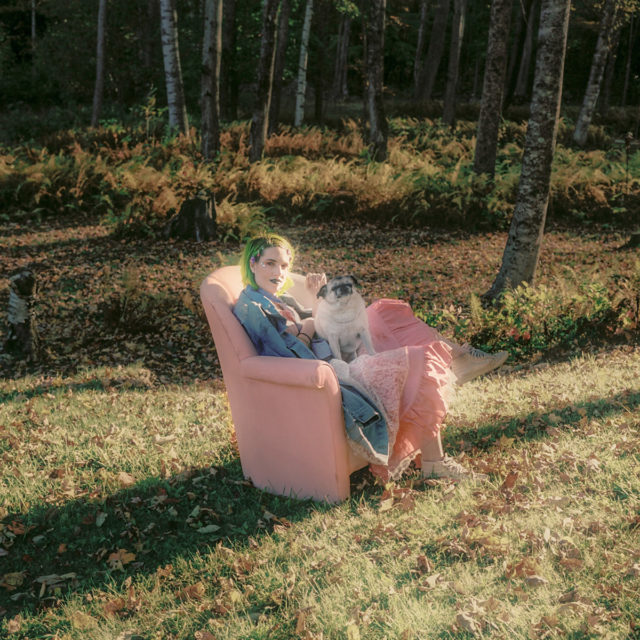 Sir Babygirl‘s debut album Crush On Me is out on Father/Daughter.

Crush On Me is the long-awaited debut album by Kelsie Hogue under the moniker Sir Babygirl. A queer and non-binary pop sensation from New Hampshire who put out three of the best singles to be released under any genre last year, Sir Babygirl was one of the hottest names in alternative pop music even before putting out an album or EP. And deservedly so. Her music appropriates pop tropes not so in vogue at the minute and gives them a new spin by placing them in a queer context.

Much has been written about Hogue’s obsession with 2000s pop. Unlike with other left-field DIY pop artistes, there’s not a lot on Crush On Me that sounds forward-thinking in the way that SOPHIE or Brockhampton do. Instead, Hogue’s efforts seem more focused on recuperation than on re-invention. Take lead single “Flirting With Her” and the crunchy guitars with which the song opens, or the gang vocals in “Cheerleader”. A good chunk of the album feels taken out straight out of the mid-2000s pop scene – some of it sounds pop-punkish in a good way, which is something I thought I would never say about anything.

If you’ve been following Sir Babygirl for the past year or so, there’s a good chance you’ve already heard almost half of the album. However, these songs take on a different meaning when listening to the album in full. Clocking in well below the thirty minute mark, Crush On Me impresses by showcasing a wide range of styles in a very limited time. “Heels” is a straightforward pop song almost exclusively propelled by its programmed rhythm section, “Cheerleader” is a kickdrum-and-synth led banger that wouldn’t be out of place in Robyn’s Body Talk, the unabashed loneliness of “Everybody Is A Bad Friend” feels like the end result of a Rilo Kiley and The Radio Dept supergroup, and you’ll probably go double check that you aren’t listening to one of Paramore’s latest albums after hearing “Pink Lite”. The list goes on and on. Crush On Me is an absolute gem of an album, the kind of release you can listen to on repeat until you’ve learnt every note and every word.

A ridiculously strong album from front to back, Crush On Me is not marred by any underdeveloped idea or dubious production choice. Every song here is either an absolute banger or a nice little linking point that makes Crush On Me feel more like an album effort. And that is quite the feat when you come to consider that one third of the album is comprised by reprises and outros, something that Hogue can easily get away with – simply because the reprises might be the best thing about Crush On Me. On “Flirting With Her (Reprise)”, she takes one of the original’s many hooks and writes an entire new song out of it, an understated acoustic guitar tearjerker that stands in stark contrast with the crunchy feel of its mother song. A similar thing happens with “Haunted House (Reprise)”, whose melancholy airs suggest that the party of the original song resulted in a hangover from which no one has recovered yet.

It comes as no surprise that Hogue attended a classical pop structure course, as the songwriting in Crush On Me reveals that, for all her insistence on putting together a different disguise for each song, there are a few recurrent tropes in her songs. For example, Hogue often goes for string-led breakdowns just before the final burst of emotion (“Flirting With Her”, “Cheerleader”), and most of her choruses are structured in a similar way. This is far from being a criticism – Hogue recognises the strongest points in her songwriting and makes the most out of them every time she can.

Crush On Me screams out “debut album” throughout every second of its running length. Hogue experiments with different sounds in every track, not because she hasn’t figured things out yet but because fluidity is at the very heart of the Sir Babygirl project. Based on some of the album’s passages, it wouldn’t be too surprising if the next Sir Babygirl album is an ambient-inspired dream-pop record or a straight-up power pop album – hell, it might even be both things at the same time. We can hazard a guess, but only Kelsie Hogue knows what Sir Babygirl will be in the future. The rest of us should just sit back, relax and enjoy what Sir Babygirl is at the moment – one of the most exciting news in pop music in recent times.