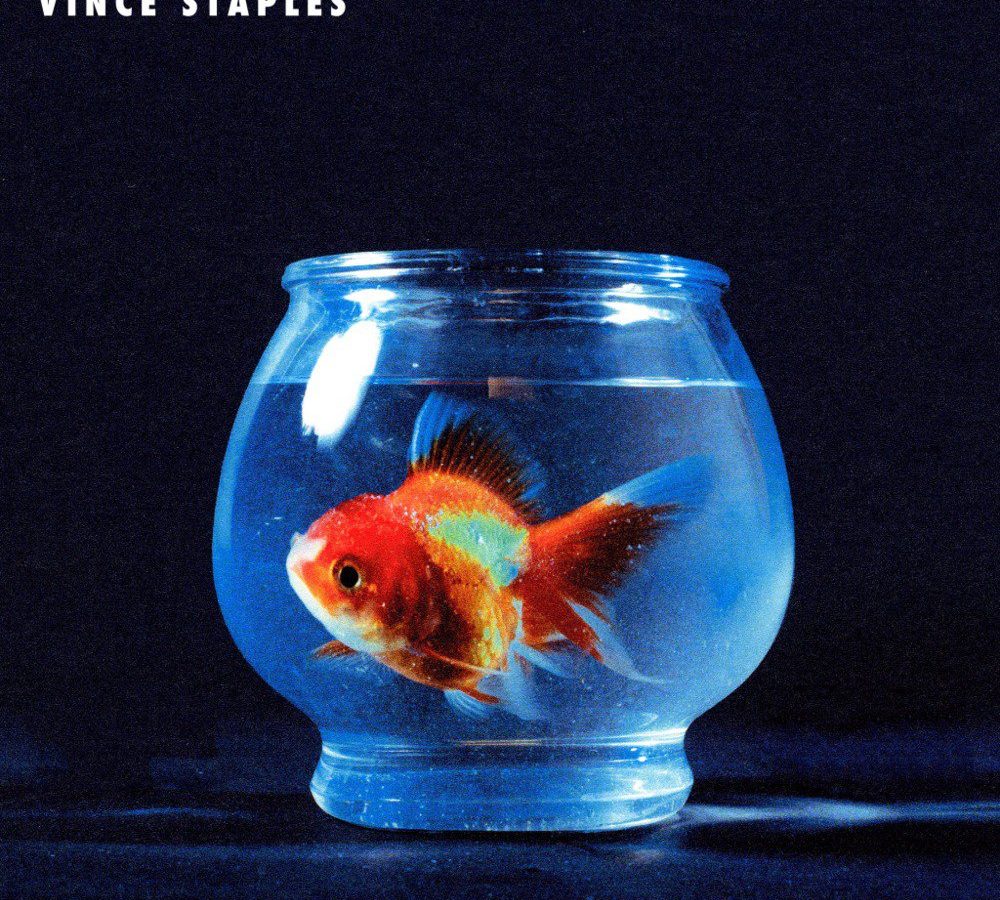 Giving a fuck has never seemed to be very high up on Vince Staples’ list of priorities, as the delivery of his two cents at face value has always remained a common thread within his music and public persona.

With ‘Big Fish Theory’, Vince’s rebellious sense of self both melds and clashes with an album that seems to signify a rather open attempt at breaching the mainstream, wherein the help of an all-star guest list featuring the likes of Flume, A$AP Rocky, and Kendrick Lamar is being utilized. In fact, right away we’re met with both a club-friendly introduction in ‘Crabs In A Bucket’, along with a radio-friendly follow up with the Juicy J laden track “Big Fish” – both of which mark departures from the norm for Vince in terms of sound and audience accessibility.

From there, the moods of the album are relatively consistent, in that they tend to remain torn between dark, watery club rap, heavily bass driven semi-trap, and blends of the two (see: ‘Love Can Be…’, ‘SAMO’, and ‘Party People’, respectively). In that sense, the production here is mostly interesting and adventurous throughout, with sonic boundaries being tread with a heavy foot. Yes, there are some limitations to the range of synth-basses and drum patterns being used on ‘Big Fish Theory’ that are bound to get familiar – if not a bit repetitive – throughout the album’s run time. But, overall, the instrumentation on this LP does feel like the highlight.

Within the context of today’s hip-hop, Vince Staples‘ ‘Big Fish Theory’ is an innovative, coherent album that excels in several ways.

Unfortunately, that’s where some disappointment sets in. Had Vince been able to improve upon, or even just match the caliber of rapping he put forth on 2015’s ‘Summertime ’06’ here on ‘Big Fish Theory’, this new album would represent a force to be reckoned with, rather than an interesting-enough sidestep.

Whether it be the relatively lackluster bars of ‘Big Fish’ and ‘BagBak’, the inexplicably repeated verse and mostly missed opportunity of ‘Rain Come Down’, the forcedly ‘catchy’ hooks on tracks like ‘Party People’, or any other instance of unexceptional vocal contributions from Vince that regrettably take place across the album, it’s truly difficult to shake the feeling that Vince Staples himself was the most off-seeming component of the new Vince Staples record.

Historically, this is an artist who’s at his best when he’s delivering brutally vivid, twistedly poetic descriptions of the violence that defined his youth, accompanied by a tastefully simple hook or two to drive the point home; and yet, ‘Big Fish Theory’ is an album that – in attempting to branch off into new, often more widely appealing directions – entirely leaves behind some of the most integral pieces of Vince’s artistic voice.

That being said, this is not at all a project worth trashing, nor is that what I’ve just meant to do here. Within the context of today’s hip-hop, ‘Big Fish Theory’, is certainly an innovative, coherent album that excels in several ways. However, within the context of Vince’s own body of work, it just doesn’t feel like true progress.