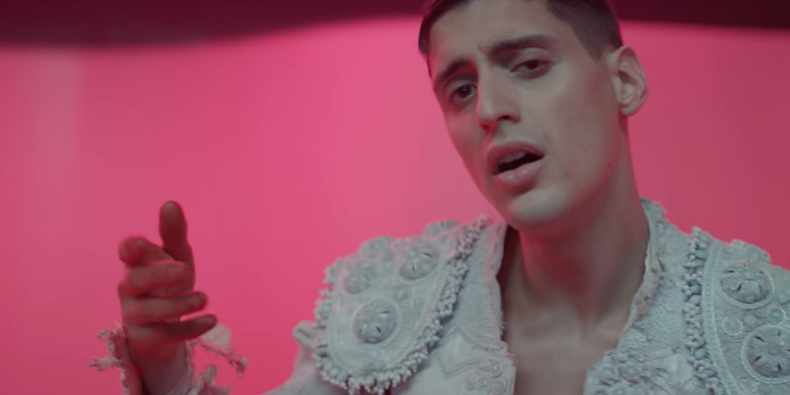 We were discussing a few weeks ago how good Arca‘s new album is going to be. From “Piel” to “Anoche“, we were expecting for his self-titled release to be his breakthrough. We weren’t expecting this much.

“Reverie” can be compared to “Black Lake” by Björk (that he co-produced) as both tracks share a common vulnerability. The Jesse Kanda-directed video follows his journey as a wounded matador with mechanical legs. As the songs grows on you, his voice starts to get more intense, following the dramatic drums, putting yourself in a fragile position as a viewer to share the same extreme pain. Eventually, Arca bleeds, flower petals start to come out, showing the beauty of being hurt and ends on the ground, dead.

The matador outfit is not only showing his fight against bestiality but also against his inner masculinity. The artist’s take on music has always been seen as a way to overcome gender limits, as he has shown, through his aesthetics, that women’s and men’s clothes overlap. In a press release, Arca explained about the video:

Bullfighting is a piercing metaphor: you are fighting a bull, and at the same time, yourself. You are not the victim or the oppressor, you are both— Animality and bestiality are conflated.”

Being his first time when he truly sings, the lyrics are a reflection of his soul. His experience of working in Björk‘s last album “Vulnicura” was the turning point of his career as he is not hesitating anymore about showing himself in a difficult position. Art becomes his own way of healing. When he sings “Ámame otra vez, si te atreves”, translation “Love me again, if you dare”, he is not only saying it to his love, but also to himself, as it can be difficult to love yourself.