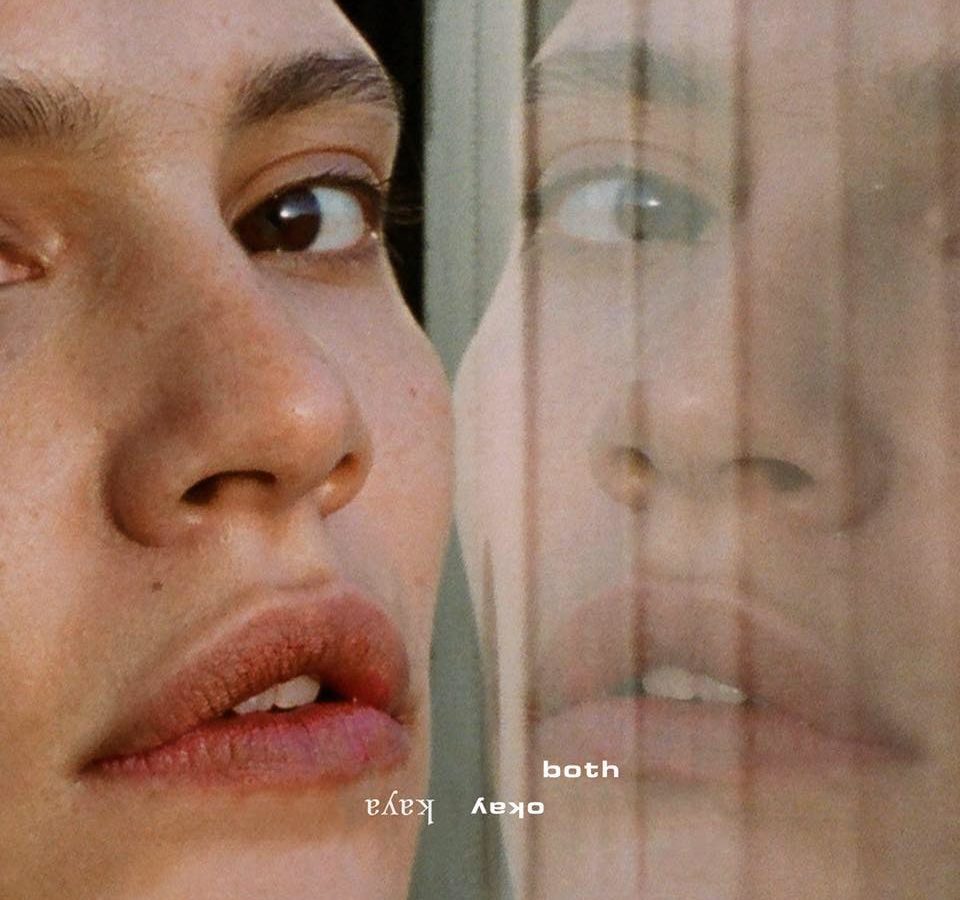 “Both,” the debut album from Norwegian singer-songwriter Okay Kaya, is out now via Heavy Body Records.

Over the past few years, 27-year-old Kaya Wilkins has been diffusing her presence and claiming her own existence transversally, through multiple mediums and professions. Film enthusiasts might have seen her on the successful lesbian thriller “Thelma”, directed by Joachim Trier; fashion experts might know she was Vogue’s “girl of the season” in 2017 after modelling for Balenciaga, Off-White and more; indie music lovers might have heard her sing a poem in Norwegian on the latest album by Aaron Maine‘s “Porches,” while also gossiping about the fact she’s actually Maine‘s girlfriend. Others probably know her as Okay Kaya, and maybe even remember the singles she released a few years ago, when she was considered by several music publications the next big thing in pop music.

Since then, a lot has happened to the music career of Okay Kaya, but one element in particular made her postpone the release of a debut album for years: an invasive management that tried to take advantage of her beauty in slimy, bothersome ways; for example, by suggesting her not to say anything about her love relationships to the producers she would work with. Okay Kaya walked away from it. She took her time, built a small home studio in her Greenpoint apartment in Brooklyn, eventually started her own label Heavy Body Records and has now finally released her first album, “Both.”

“Both” is a record that perfectly reflects the relationship Wilkins has with music. One that started in the small village of Nesoddtangen, near Oslo, where she grew up—the daughter of an Afro-American marine and a Norwegian painter. She got her first guitar when she was 13, though it was only a few years later, when she moved to New York to work as a model, that she started writing songs on a daily basis. Minimal acoustic arpeggios that she would sweeten with her vocals, singing her own thoughts softly and warmly, in a diaristic yet often cryptic manner.

A certain sonic minimalism permeates “Both,” also thanks to the intimate delicacy that only a home studio can provide. Sometimes her voice is alone, followed only by a gentle guitar picking, like on the opener “Vampire”; elsewhere simple beats, keyboards and synths create a watery surface where her vocals can sail tenderly, occasionally merging with distant boat-whistles-like synths, like on “Tu Me Manques”, a one-minute track sung completely in French. Other than keeping her songs simple and softly skeletal, she also cuts them to the bone in a structural way, leaving them seemingly unfinished, like a musical and lyrical stream of consciousness that has naturally come to an end and does not need artificial addictions or adjustments.

That’s why most of her songs do not reach the three minutes mark. Yet, the ones that do end up being some of the best on the album, and that sorts of prove how the potential of Okay Kaya is much vaster than what Both offers—that she could be even better if she took some more time. “I Die Slow” and “Fake It”, in particular, are two of the most brilliant and emotional tracks: the first is essentially a gentle folk tune built on the union between her warm vocals (at times reminiscent of artists such as Weyes Blood) and atmospheric, organic synths; the second has the features of an emotional dream pop ballad: it features some of the best vocal melodies of the album and some high-pitched vocals in the background that almost give it an EDM-vibe. But instead of accelerating or gaining power, the song coherently remains simple and calm, like the whole album.

The mix between folk and dream pop is what defines the style of Okay Kaya the most. That, and an utterly honest style in writing lyrics that should not really be confused with witty humour, but that it’s rather a straightforward way (too direct to be taken seriously at times) to talk about delicate themes. Like on the single “IUD”, a song about the usage of contraceptivse and about being in love with someone without wanting to have kids with them. “Would you come with me to get an IUD?/Maybe, if you come with me, I will let you come in me/’Cause, baby, you’re so baby, but I don’t want your baby,” she sings placidly and confidently, so much that it’s almost estranging. But it’s capturing, and it shows what Kaya Wilkins is capable of.

Not all the songs on the album are like “IUD”, though, and especially towards the end of the record there are a little too many fillers, from the odd ’80s dark wave of “Habitual Love” to “Hindsights A Bitch” and “Glitch”, where the Norwegian singer relies a too much on solemn atmospheres that do not add anything to the final product. Yet, Both remains an extremely pleasant work, and more importantly the official introduction that an artist like Okay Kaya absolutely needs. In a music world where everything needs to be immediately accessible to exist, where artists try to release something as soon as they can, no matter the quality, the patience Wilkins showed while waiting for the best moment to release her first record is rare. And nothing short of precious.